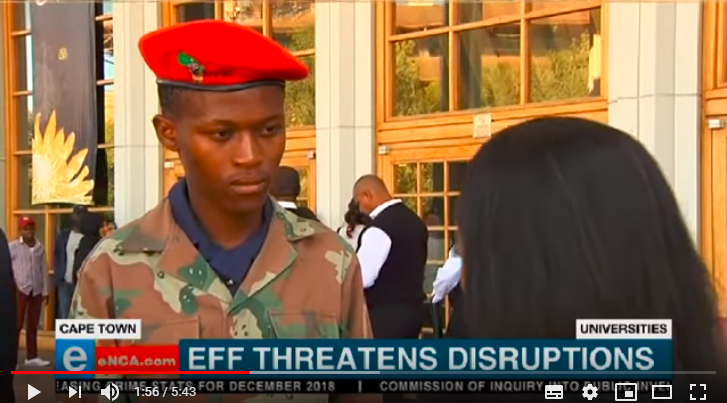 The military has not taken kindly to an EFF student leader who appeared on television wearing a South African National Defence Force (SANDF) camouflage shirt and a red beret on Monday.

Aseza Mayaphi, EFF student command secretary at the University of the Western Cape, was interviewed by eNCA wearing the outfit.

The SANDF said in a statement that anyone who was not a member of the army but wore its uniform was committing an offence and would be prosecuted.

Mayaphi was being interviewed about the EFF’s “Sizofunda ngenkani” campaign, a national campaign that aims to ensure that students have access to tertiary institutions.

The registrar of the university said there were 40,000 applications for the 2019 academic year but the institution could only accommodate 4,500 applicants. The EFF said some students were unable to access the online central system to apply.

In a short statement, the SANDF said the “young man” who was interviewed on television was "not a SANDF member".

“The SANDF further reiterates that wearing the SANDF uniform when you are not a SANDF member is a punishable offence and anyone who is caught committing this illegal act will be prosecuted,” said SANDF spokesperson Siphiwe Dlamini.