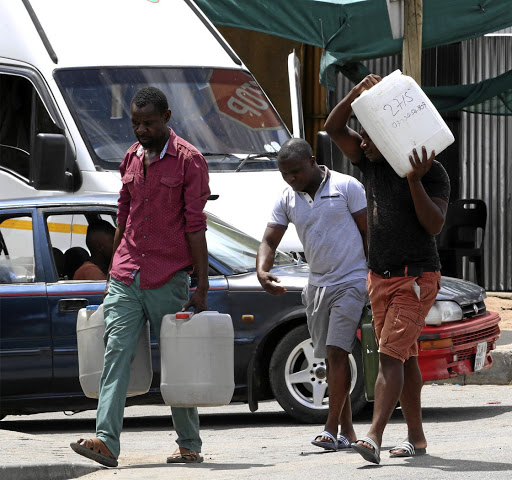 Zimbabweans going home after filling up their drums with petrol at a garage near Beit Bridge in Musina, Limpopo, because of the petrol crises in their country.
Image: ANTONIO MUCHAVE

Business is booming at Beit Bridge border post near Musina in Limpopo since the Zimbabwean government announced a fuel hike of approximately 150% this week.

Some of the Zimbabwean nationals have ventured into selling empty 20 and 25 litre water drums to those stocking up fuel as some motorists have begun panic buying in SA.

Zimbabwe has been gripped by violent protests since President Emmerson Mnangagwa announced a fuel hike of R45 per litre.

Trader Tadiwa Nemo's drum business has been doing well since the announcement. Nemo's empty drums line the road side for motorists to see.

Panic buying and a stayaway as Zimbabwe fuel price bites

A national stayaway kicked off on Monday in opposition to Zimbabwean president Emmerson Mnangagwa hiking fuel prices by 120 percent on Saturday.
News
2 years ago

"I sell these drums for R40 and R60 each. At least I am selling between seven and eight a day. People come here and buy in numbers and fill them with fuel from local garages," she said.

Another Zimbabwean national, who identified himself only as John, bought R3,000 worth of fuel at a local garage to fill up six 25 litre drums.

"I'm buying for my truck because in Zimbabwe fuel is expensive and is of poor quality. These litres are going to push me for a week and few days," he said. "When I get to Zimbabwe I will buy their fuel and mix it with the South African one. I will sell some of the litres to other motorists who are unable to purchase at Beit Bridge."

Some Zimbabweans said they struggled to get to the border due to a lack of transport for the past two days.

"It is difficult to get transport from Zimbabwe, particularly because Bulawayo's been shut down over the expensive fuel. We can easily get transport from Beit Bridge to Zimbabwe because roads are not blocked from this side," said a resident, who wished to remain anonymous.

A petrol attendant working at a garage in Musina told Sowetan buses from Cape Town and Johannesburg travelling to Zimbabwe had also been filling up drums with petrol before crossing the border.