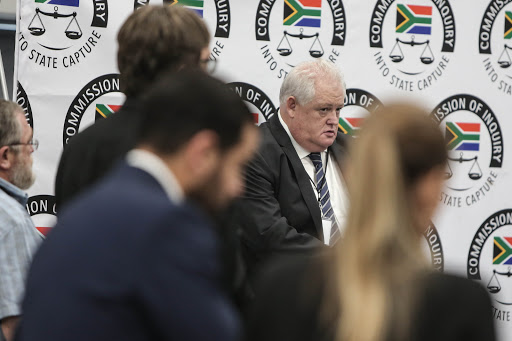 The DA has called on president Cyril Ramaphosa to cancel all contracts that government has with controversial facilities management company Bosasa.

This follows the company's former chief operating officer Angelo Agrizzi's testimony at the Commission of Inquiry into State Capture on Wednesday.

Agrizzi testified that he and current Bosasa chairperson Joe Gumede used to take grey security bags full of money to bribe people in exchange for tenders.

He said the company would spend between R4m to R6m every month on bribes.

"Agrizzi’s testimony shone a new light on how totally corrupt the ANC government is and how this corruption spreads far wider than just the Guptas and Jacob Zuma. The relationship between Bosasa and the ANC illustrates how South Africa has been turned into a klepto-state by the ANC," said DA leader Mmusi Maimane.

"Given this truly explosive testimony, I call on President Cyril Ramaphosa to instruct his government to immediately cancel all contracts and tenders with Bosasa, and place a strict moratorium on any new contracts with the company or any of its subsidiaries."

On Wednesday, Agrizzi also claimed that there was cash amounting to millions of rand that was be kept in a vault on the company’s premises.

He said the company did not give bribes in lump sums, but opted to make monthly payments to ensure people they bribed were beholden to them.

"It is also becoming increasingly difficult for the president to avoid the DA’s earlier calls for an independent inquiry into Bosasa, covering the corrupt company’s full relationship with the ANC and the state – including the relationship between the President’s family and Bosasa," added Maimane.

He claimed that after being bribed, Acsa awarded the company a five-year security contract.

Maimane said bribery is tantamount to  corruption and "this is the very antithesis of bringing change that builds one South Africa for all."

More to state capture than Guptas

Many of us probably had never had of Angelo Agrizzi before yesterday when the former Bosasa chief operations officer became a surprise witness at ...
Opinion
3 years ago

'I answered honestly' on Bosasa: Ramaphosa

Cyril Ramaphosa has remained adamant that there was no corruption between him and controversial government contractor Bosasa.
News
3 years ago

'There was no Bosasa donation' - Cyril Ramaphosa tells EFF in parliament

President Cyril Ramaphosa has again distanced himself from controversial facilities management group Bosasa‚ saying on Monday that he had not ...
News
3 years ago

Bosasa claims they have no contract with Ramaphosa's son

Bosasa (now African Global Operations) claims that there is no contract between the company and President Cyril Ramaphosa’s son‚ Andile.
News
3 years ago

The DA says there is a link between President Cyril Ramaphosa’s R500‚000 Bosasa donation and state capture.
News
3 years ago
Next Article