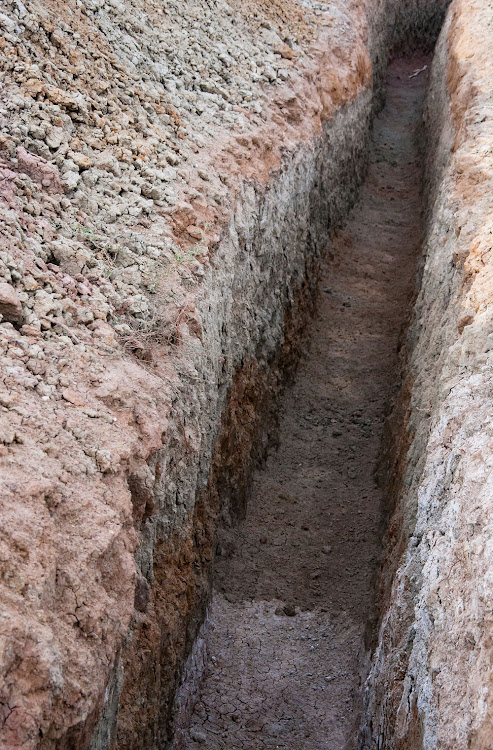 An image of a trench
Image: Alexandr Shadrov/123rf

A multi-governmental task team has been established to support the family of Nsuku Mhlongo, the six-year-old boy who died in Giyani, Limpopo, after falling into an open trench last weekend.

The team - which is led by Mopani district municipality mayor Nkakareng Rakgoale - includes officials from the department of water and sanitation (DWS), provincial and local governments, Lepelle Northern Water, and community representatives.

The team has also conducted an assessment of all open trenches in the area and "immediately" closed uncovered pits to prevent more fatalities.

DWS spokesperson Sputnik Ratau said yesterday that government regretted the incident and that they were committed to assist the family with funeral arrangements.

Residents suffer as firm goes off site over nonpayment.
News
3 years ago

The boy died on Saturday after falling into a trench left open by a contractor in Homu village. The victim was in the company of his friends when the incident happened.

The boy's lifeless body was later retrieved by his father and community members.

Following the incident, which family spokesperson Foster Chavalala described as a double tragedy due to the fact that the provision of water still remained a pipe dream in the village, the family called for government to incur the burial costs.

"We believe the government will do the right thing and take care of funeral costs because it was as a result of a government project that our son lost his life," Chavalala was quoted as saying early this week.

Ratau said in its efforts to ensure that the Giyani Intervention Water Project was completed, the department was in the process of dispatching construction engineers to go on site in Giyani as a matter of urgency.