IFP in full song as it kicks off voter education 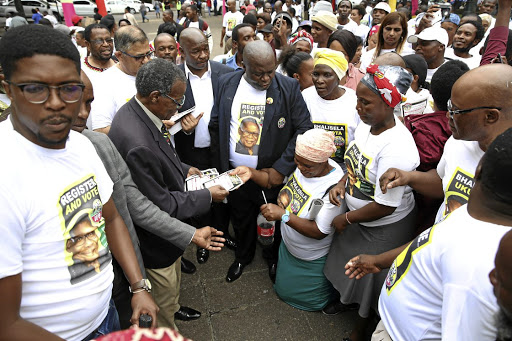 Hundreds of IFP supporters who gathered in front of the Durban City Hall yesterday for the launch of the party's voter registration campaign went wild when the DJ played the song Ayisoze yaphelaamandla indlovu (The elephant will never lose strength) while waiting for their leader to address them.

The IFP, founded by its veteran leader Mangosuthu Buthelezi in 1975, adopted the elephant as its logo in 1998. No wonder the IFP supporters sang the song with such passion. During the 2014 national election, among the songs they sang were Iyaphi indlovu? Iyaphambili (Where is the elephant going? Forward).

When Buthelezi emerged from the podium to address them, the supporters went into a frenzy and greeted him with another song: Kubi, kubi! Siyaya okhethweni (No matter how difficult it is, we're going to the election). That's how the IFP launched its voter registration campaign ahead of this year's national elections - the date of which has not yet been proclaimed by President Cyril Ramaphosa.

What this means is that, contrary to speculation, the opposition is not going into this election against a weakened ANC machinery.
Opinion
3 years ago

The IFP's voter registration campaign was launched three days after the ANC launched its election manifesto at a packed Moses Mabhida Stadium in Durban on Saturday. When Buthelezi took to the podium, his message was simple: he exhorted the people of SA to get ready to vote.

"When it comes to something as important as shaping the future, there are things you need to prepare.

"The first thing on the check list is registering. If you want to become part of the conversation, if you want your voice to be heard, if you want to dictate your own future, you need to register to vote," he told his supporters.

The veteran IFP leader, who celebrated his 90th birthday late last year, told his supporters that there were only 10 days left before the final voter registration weekend on January 26 and 27.

He urged those who had not yet registered to put reminders on their phones and decide on which day they would go to register, as "this is an event not to be missed" and a "pivotal moment of democracy".

Buthelezi was worried that most young people were not registered to vote.

"I know I'm speaking mostly to young people, because more than half of our population is under 30. But South Africans aged between 18 and 30 have the lowest rate of voter registration of all. This is bad news and does not make sense.

"You are the change makers, the thought leaders and opinion shapers. Tomorrow belongs to you. The vast majority of South Africa's voters should be the youth. Let's put this right by getting you registered. The future is made by those who participate. I know you have something to say. So make sure you can say it when the moment arrives. When South Africa goes to the ballot box, make sure you can join," he said.

But he then dropped a bombshell, saying: "I personally am very sceptical about a free and fair election."

IFP chief whip Narend Singh said the ANC already knew the date of the elections but was keeping it a secret to prevent other parties from starting their election campaigns.