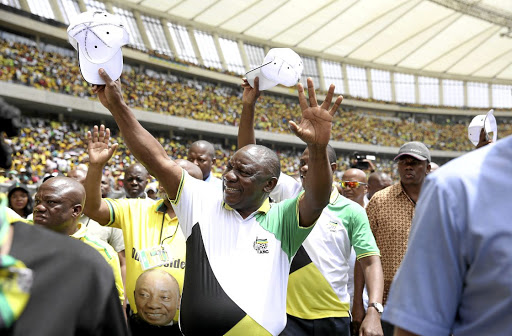 President Cyril Ramaphosa has admitted the governing party has made mistakes in the past and pleaded with the country to give the ANC a chance.

Ramaphosa told over 80,000 supporters who filled up Moses Mabhida Stadium in Durban on Saturday that some issues had hindered the process of trying to bring about change in society.

"We must acknowledge that state capture and corruption have weakened several of our public institutions, undermined effective governance and contributed to the poor performance of our economy.

"We must also acknowledge that factionalism and patronage has diminished the ability of the ANC to lead the process of transformation and fulfil its mandate to the people."

Ramaphosa's band aid is not enough to patch up ANC

Whenever I feel like depressing myself with a bit of mindless twaddle, I google Mzwanele Manyi.
Opinion
3 years ago

The ANC's 66-page manifesto consists of a number of promises, and admission of mistakes the party has made since the dawn of democracy.

"The ANC acknowledges that we made mistakes and veered off course. As a nation we have learnt of the harsh impact of corruption on society and the economy. We have witnessed the loss of integrity in some of the institutions of state, business and political and other organisations."

The manifesto promises to get rid of state capture and to strengthen state institutions to ensure that stolen money was repatriated from abroad and from tax havens.

It further undertakes to act against private corporations involved in tax evasion and illicit activities; to implement lifestyle audits for public servants; develop a more transparent tender system and build a social compact around anti-corruption with the public.

The January 8 statement, which coincided with the manifesto launch, also states the party's priorities for the this year.

It says it has learnt from its lessons - both negative and positive - and will use those experiences to rectify mistakes.

"We recognise that over a number of years, our movement has fallen short of the people's expectations. The reason for this declining popular confidence was critically and thoroughly discussed at the 54th national conference and a programme was adopted to correct these mistakes.

"The last 25 years have demonstrated the enormity and complexity of the task of redressing the injustices of the past and advancing fundamental change. These years have also shown the great power of a nation working as one to achieve a common goal," the statement reads.

On what the party will do if voted to govern again after the general elections, Ramaphosa said it pledged to create jobs, implement pro-growth policies and speed up the implementation of its plans to seize land without compensation.

Elections are expected to be held in May but a date has not yet been announced.

Ramaphosa said the governing party had a solid plan to raise over R1.2-trillion in new investments over five years.

It was tough! Cyril Ramaphosa's frank assessment of the Zuma years

President Cyril Ramaphosa on Thursday gave a frank assessment of the Jacob Zuma years in government - telling his audience in Pietermaritzburg that ...
News
3 years ago

Ramaphosa’s message to the ANCYL: Get your books in order

President Cyril Ramaphosa has urged the ANC Youth League to elect leadership like its former president Peter Mokaba when they go to an elective ...
News
3 years ago
Next Article