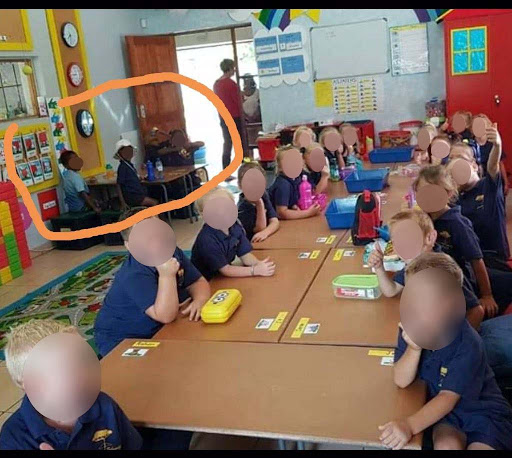 A picture of one of the grade R classes at Laerskool Schweizer-Reneke seemingly depicting white learners seated separately from the black children.
Image: Supplied

The majority of pupils at Laerskool Schweizer-Reneke in the North West did not go to school on Friday following protest action on Thursday by parents who were not happy with how the school separated black grade R pupils from their white classmates this week.

The school was shut down on Thursday over a viral image of black children segregated from their white counterparts at the school.

The class teacher of the classroom where the image was taken was immediately suspended by education MEC Sello Lehari. Schooling was expected to resume on Friday morning but almost all white pupils did not show up.

School Governing Body (SGB) member Oloff van Niekerk said the low turnout was due to threats from political groups that were part of the protest on Thursday.

Black parents at a North West school have been told to take their children to township schools.
News
2 years ago

“Some parents decided to keep their children away from school due to the tension that was there and threats that have been made by political groups,” he said.

Van Niekerk said the school was open but that mostly teachers and a few pupils attended.

North West education spokesperson Freddy Sepeng said they were expecting every pupil to be at school on Friday morning, especially after Lehari’s intervention on Thursday.

He said they have since heard that there’s an SMS circulating telling the parents of white pupils not to take their children to school on Friday. The school and the SGB have since distanced themselves from the SMS.

During his visit to the school on Thursday, Lehari immediately suspended the concerned teacher and told protesting residents that he will decide the principal's future only on Monday.

A task team has since been established to investigate racism at all school in the North West.