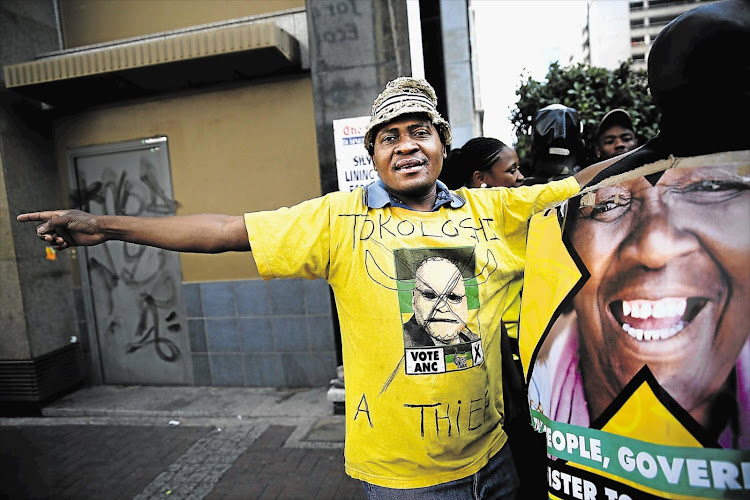 A man wears an anti-Zuma T-shirt outside Luthuli House in Johannesburg on September 5 2016.
Image: Alon Skuy

The ANC says anyone who wears a "divisive" T-shirt at its manifesto launch rally at the Moses Mabhida stadium on Saturday will be guilty of a form of sabotage - and security personnel will deal with them.

Party secretary-general Ace Magashule said on Friday during a media briefing that people wearing T-shirts with insulting slogans or divisive messages will be barred from the stadium.

The party will also ban placards that show division.

This comes as party leaders repeatedly asked supporters this week to not "disrespect" President Cyril Ramaphosa at the rally.

KwaZulu-Natal is a political stronghold of former president Jacob Zuma. The audience showed their support for him on Tuesday at the ANC’s birthday celebrations at the Ohlange Institute in Inanda.

Party insiders say the ANC is worried people will insult Ramaphosa by showing their support for Zuma through political paraphernalia.

The ANC's acting spokesperson, Dakota Legoete, said the party would treat breaches as "an element of sabotage". He added that marshals and security personnel have been instructed to deal with culprits.

Magashule said Zuma would attend the rally but former president Thabo Mbeki will not be able to attend and sent his apologies.

The stadium's gates will open at 7am and Ramaphosa will deliver the main address at 10am. A music festival will be held from midday onwards.

Magashule said the ANC believed the stadium will be filled.