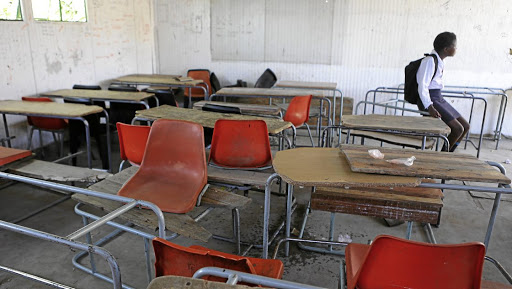 A class at Eqinisweni secondary in Tembisa.
Image: Sebabatso Mosamo

Some schools in Gauteng had a rough start to the new academic year yesterday.

These included all schools in Duduza outside Nigel which were broken into over the festive season.

Gauteng education MEC Panyaza Lesufi said: "There is no school in Duduza that was not broken into people stole everything [they could take] from the schools. People were stealing even heaters in summer."

While Ekurhuleni celebrated the opening of a new state-of-the-art primary school in Tsakane, the school however still awaits the construction of a tarred road that leads to it.

A number of people were stuck in the mud after a rainstorm the previous night.

In other parts of the province the first day of schooling was stressful for some parents braving the scorching heat to register their children at schools. More than 50 parents carrying umbrellas waited patiently outside Kaalfontein primary school in Midrand.

Mercy Ndlovu, 40, said she had been at the school since 7am and by midday she was still waiting to be helped.

"I am here to register my two children who are in grade 1 and 6. I did not know about the online applications."

Some parents spent the first day of school travelling between the school and education district offices to finalise the placing of their children.

Tshono's mother Julia said her daughter had woken up at 5.30am to prepare for her first day.
News
3 years ago

A 25-year-old mother said her six-year-old child was kicked out at Sefika primary school in Soweto and told her name was not on the list of the people who applied.

"This online application system is giving me problems because I came to the school to apply but today my child was kicked out. They told me to go to the district offices, I don't know for what," she said.

A group of about 10 angry parents were locked outside Tsosoloso secondary school in Ivory Park in Midrand.

They wanted space for different pupils in grades 8 to 10.

One of the parents said they were being sent from pillar to post.

"This morning I was told to go to the district offices and there I was sent back to the school. It's really frustrating because I don't know what is going to happen," the parent said.

Meanwhile, temporary classrooms built with corrugated iron sheets without windows, doors, chalkboards, and a few tables and chairs in classrooms were some of the conditions that greeted a group of grade 8 pupils at Eqinisweni secondary school in Tembisa.

Pupils use trash to make chairs

A 13-year-old pupil said she was looking forward to her first day at high school but was disappointed when she saw her new classroom.

"This is not what I envisaged my first day in high school to be like. The classrooms have holes in the wall, one can see what is happening in the other class."

The pupil said they were forced to sit on tables or stand because there were not enough chairs for everyone.

Another 14-year-old pupil said he had to take his chair with to the toilet because it would be taken by another pupil if he left it behind. "We did not even get the stationery, so we don't know when learning will start taking place."

The temporary classrooms house more than 400 grade 8 pupils. One class has 96 pupils and two others 76 pupils each.