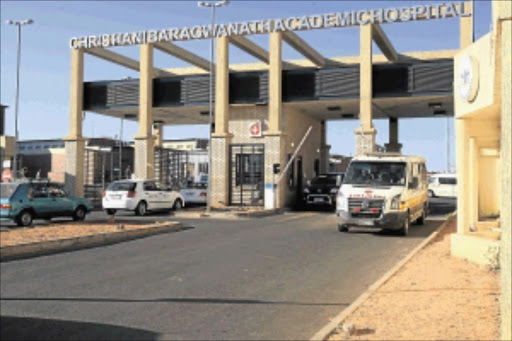 Dr Nkele Lesia's appointment as the new CEO of Chris Hani Baragwanath Hospital was on Thursday welcomed by veteran health observer Jack Bloom – who hopes she tackles its deep-rooted problems head on.

"This appointment is long overdue as the hospital has been without a permanent CEO for three years‚ since former health MEC Qedani Mahlangu removed the previous CEO for unexplained reasons‚" said Bloom‚ who represents the DA in the Gauteng legislature with a focus on the health portfolio.

Bloom said the newly appointed Lesia would be in charge of a R3bn budget and 6‚000 employees.

"I hope that she provides the necessary strong leadership to rebuild morale at the hospital and fix deep-rooted problems that affect patient care‚" Bloom said.

Spokesperson for the Gauteng department of health Lesemang Matuka confirmed the appointment.

The hospital made headlines several times in 2018.

In August‚ workers at the hospital downed tools and embarked on a strike against what they said was "rife corruption which has crippled health-care service at the hospital". The strikers protested outside the hospital.

Staff spokesperson Yandisa Zungula said: "The action came after numerous tea breaks and lunch-hour pickets at the hospital by workers who have had to render compromised service to patients as a result of a captured procurement system‚ including a memorandum of demands which was submitted to the hospital's acting CEO on August 1 but has not yet been responded to."

In October‚ the hospital reported that it was treating as many as 3‚000 patients for violence and accident-related injuries.

Gauteng Health MEC Gwen Ramokgopa said most of these incidents happened at weekends and public holidays‚ due to the influence of alcohol. "People get injured and want to be seen first when they arrive at casualty‚" she said.

Bloom said it was distressing that violence and motor accidents put a huge strain on the hospital.