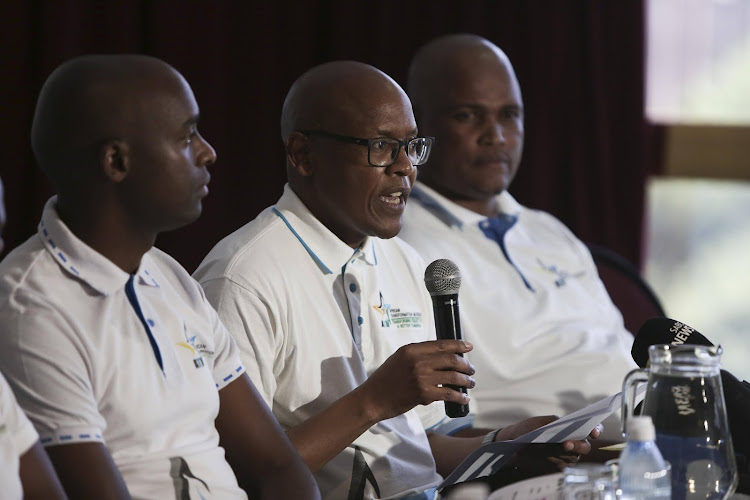 Mzwanele Manyi talks to members of the media and supporters, 09 January 2018, at the Joburg Theatre in Braamfontein, where he launched African Transformation Movement a new political party.
Image: Alaister Russell/The Sunday Times

It's official, Gupta vendor finance beneficiary Mzwanele Manyi has found a new home in the ATM.

The former cabinet spokesperson announced on Wednesday that he had left the "fatigued and captured" ANC for the African Transformation Movement.

Manyi described 2018 as the year that "broke the camel's back" that pushed him out of the governing party.

According to Manyi, the ANC cannot be trusted as it has reneged on its own Nasrec conference resolutions.

Former media owner Mzwanele Manyi held a media briefing on January 9 2018 to announce his move to a new political home, the African Transformation Movement (ATM). Here are 5 highlights from the briefing.

Those close to Mzwanele Manyi claim he is headed for the ATM.
News
2 years ago

He claimed the ANC was buying time on the land expropriation without compensation resolution while it abandoned the resolution to establish a state bank and nationalise the Reserve Bank.

"Let's allow the ANC to retire and usher in younger, fresh and uncaptured blood.

"Let's allow those without the Codesa baggage to lead. ATM is new and has no baggage of history of corruption or unfulfilled promises."

Manyi also said that ATM was a much-needed "breath of fresh air" in South African politics.

Manyi made headlines in 2017 when he bought the Gupta-owned ANN7 television station and The New Age newspaper for R450m through vendor financing. The media outlets were later shut down.