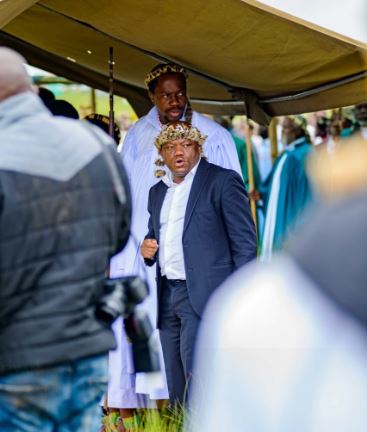 KwaZulu-Natal ANC chairperson Sihle Zikalala has asked for blessings from the leadership of the Shembe Church ahead of elections.

Speaking on behalf of ANC president Cyril Ramaphosa who could not make it due to bad weather conditions en-route to Ikhenani LamaNazaretha Asebuhleni, Zikalala said prayers were much needed from the congregation.

“Chief of chiefs, we want to ask for blessings in the province of KwaZulu-Natal and the whole nation to have peace as we head to elections. We ask for prayers,blessings and peace in the province as it is well-known for [political] violence. We are hopeful that the chief of chiefs will grant us those blessings,” said Zikalala.

ANC eThekwini regional chairperson and mayor Zandile Gumede echoed Zikalala’s plea. “As the leadership of the ANC deployed to this church, we humbly request that you pray for peace as we head to elections. Chief of chiefs, we humble ourselves before you and we ask for victory in the upcoming election as the elected leadership,” pleaded Gumede.

Members of the Shembe Church, who boast about four million countrywide, were disappointed to hear that the president would no longer be attending. A heavy mist was cited as the reason for Ramaphosa to cancel his visit. On Saturday, the ANC will launch its manifesto at the Moses Mabhida Stadium in Durban.

Only ANC can build decent houses for poor, says Ramaphosa

President Cyril Ramaphosa on Monday told residents of the lower South Coast region that the ANC is committed to uplifting  South Africans' standard ...
News
3 years ago

President Cyril Ramaphosa said on Tuesday the ANC was unfazed by the formation of new parties by former members wanting to challenge the governing ...
News
3 years ago
Next Article