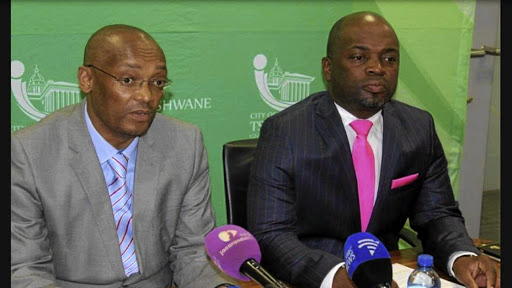 City of Tshwane manager Moeketsi Mosola, left, and mayor Solly Msimanga are once again at loggerheads. This time it's over the appointment of an acting city manager.
Image: Facebook

The controversy surrounding the appointment of the Tshwane acting city manager has once again pitted mayor Solly Msimanga against the man he appointed to run the city - Moeketsi Mosola.

Mosola caused an uproar as he appointed head of emergency services, Previn Govender, as acting city manager as he was going on leave. This was in line with the rules of the council.

Mosola's decision sparked controversy as the city is still investigating Govender after Sowetan revealed last year that he applied for the top job even though his qualifications were not accredited with the South African Qualifications Authority.

The ANC described Govender's appointment as disappointing and called on speaker of council Katlego Mathebe to convene an urgent council meeting to debate the controversial appointment.

Msimanga has had to answer questions about the appointment while on a party campaign trail.

In its official response, the city said: "The executive mayor is not in support of Govender's appointment as acting city manager.

She said Msimanga had requested confirmation of the formal qualifications of senior managers throughout the city.

"The city manager has also on numerous occasions alerted the media to an investigation which he has instituted as a result. Mr Govender's formal qualifications verification will be covered as part of that process and the City will make a determination at the finalisation of that process."

Late last year, Msimanga wrote to DA leader Mmusi Maimane asking for his intervention in the broken relationship between himself and the city manager.

Mmusi Maimane is considering whether to let go of Tshwane mayor Solly Msimanga as his feud with city manager Moeketsi Mosola escalates.
News
3 years ago

In his letter, Msimanga told Maimane that the conduct of the city manager was having a negative effect on service delivery in Tshwane.

The relationship between Msimanga and Mosola hit rock bottom since the Glad Africa scandal.

Mosola was being investigated by the city for a R12bn project management contract awarded to consultancy firm GladAfrica.

In September, Mosola faced possible suspension but survived when council changed its tune and resolved that the probe against him would happen while he remained in office.

Auditor-general Kimi Makwetu has already written to Mosola, requesting him to classify the GladAfrica expenditure as irregular, failing which the metro stands to be given a qualified audit.

Attempts to get comment from both Mosola and Govender were unsuccessful.