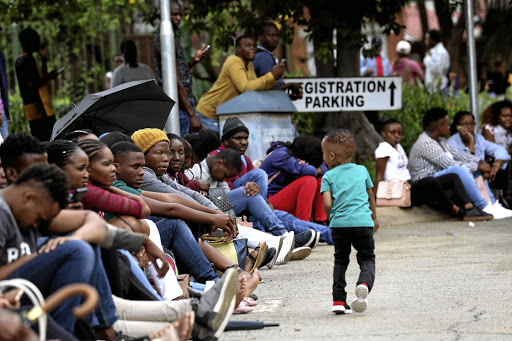 Hundreds of students arrived at Unisa's Sunnyside campus to register for their studies yesterday, only to find student leaders had shut down the campus.
Image: SANDILE NDLOVU

Thousands of aspiring and returning University of South Africa (Unisa) students across the country were left stranded yesterday when the institution's student representative council shut down operations at all campuses.

The SRC has accused the university of offering unaccredited qualifications.

Unisa national SRC president Wadzanai Mazhetese said they would not allow the registration process to continue before the university clarified its position on courses that were being offered despite not being accredited.

Mazhetese said from Friday, the university had been withdrawing courses for which many students have already applied for.

Unisa 'shut down' not necessary

Thousands of frustrated applicants and students queued outside University of South Africa (Unisa) campuses in vain yesterday, as the institution was ...
Opinion
3 years ago

Students from as far as the North West arrived as early as 4am to apply and register for courses yesterday but were unable to do so despite having queued for hours.

Mazhetese threatened to embark on protests and make the university ungovernable if the institution failed to "adequately" address their issues.

Mazhetese was speaking to the media while thousands of students were stranded outside Unisa's main campus in Pretoria yesterday.

Moliehi Lengene, a second-year BCom law student said she arrived at the campus at 4am to complete her registration.

"Unisa's online system is dysfunctional, making it very difficult for me to register. I had to sleep at my friend's place so I could be here early and register, but found that everything was closed," Lengene said.

Unisa students urged to register online due to 'national shutdown'

The University of South Africa (Unisa) has urged its students to register online following the "national shutdown" called by the student ...
News
3 years ago

A psychology student who asked not to be named said he did not know the reason behind the shutdown, but was not impressed with the situation at the campus.

"These SRC guys are just politicking. They don't care about us and are adding to our frustrations because we could not register online. We come here and we find this mess, it's not fair," the student said.

Unisa spokesperson Martin Ramotshela said they were aware of the shutdown and were engaging the SRC in an effort to find a solution speedily.

He acknowledged the institution had mistakenly up-loaded some unaccredited programmes onto their system, but the matter was being addressed. "It is unfortunate that something like that has happened, but the university has intervened in that matter. There has been an engagement between the university and SAQA as we speak so that we get the necessary accreditation and then students will be allowed to register," he said.