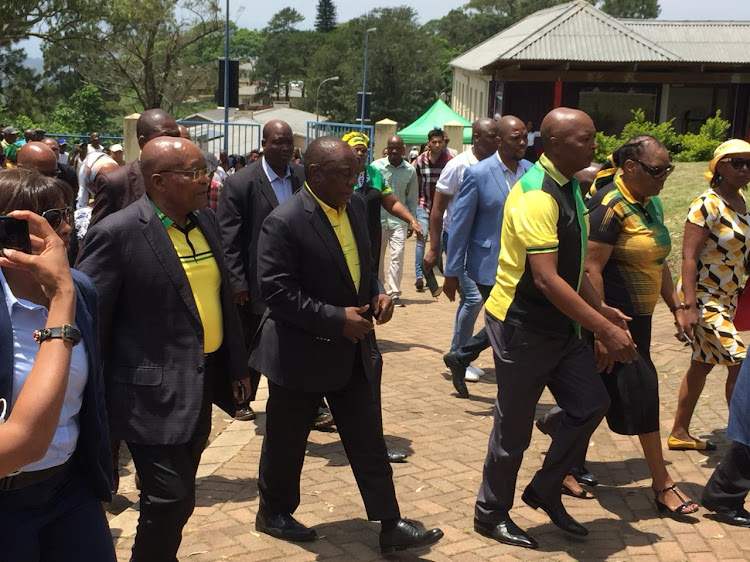 ANC president Cyril Ramaphosa and former president Jacob Zuma greet members of the community whilst on their way to the wreath laying ceremony at Ohlange Institute in Inanda, north of Durban.
Image: Neo Goba

President Cyril Ramaphosa dedicated the opening of his January 8 address to reassure ANC supporters of his good relationship with former president Jacob Zuma as the crowd notably cheered his predecessor more than him.

African National Congress supporters who gathered for a rally marking the January 8 celebrations, at Ohlanga sports stadium in Inanda, made known their support for Zuma.

As Ramaphosa took the podium, he thanked Zuma for being president while the crowd cheered incessantly for the former president.

Zuma accompanied Ramaphosa to the rally - in an area known to have been his stronghold since his tenure as deputy president of the ANC.

When ANC provincial chairperson Sihle Zikalala introduced Ramaphosa the crowd was mostly quiet, while they broke out in chants and cheers when Zuma was introduced.

Ramaphosa dismissed talk that he would be reprimanding Zuma. “He is now a former president, I will use him for different (tasks, as) former presidents have experience and knowledge,” he told the hundreds gathered to mark the ANC’s 107th birthday celebrations.

Ramaphosa recounted his history with Zuma further, saying he’s the “luckiest president in recent years in the ANC”, because two former presidents of the ANC were still alive - Zuma and Thabo Mbeki.

Ramaphosa did not enjoy support from the majority of the ANC in KwaZulu-Natal in the run-up to his election as ANC president at the party's Nasrec conference in 2017. However, there has been an effort in the ANC to paper over the wounds and focus on the elections.

Zikalala told the crowd that there was no such thing as Ramaphosa not being welcome in the province.