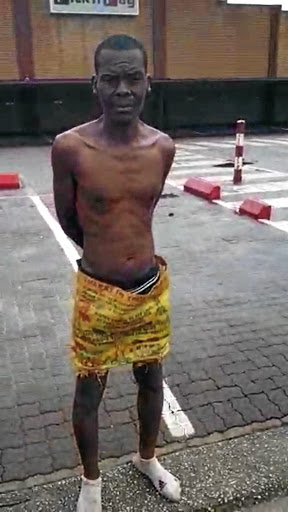 Charlie Mabuza, a security guard, was forced to strip down to his underwear in Bronkhorstspruit.
Image: SUPPLIED

The small town of Bronkhorstspruit is expected to come to a standstill today as residents plan a shutdown after a security guard was stripped down to his underwear and forced to walk 3km in the rain.

Residents were angered after a video of Charlie Mabuza, 36, walking around town with a yellow rubbish bag wrapped around his waist surfaced on social media last week.

Mandlakayise Mahlangu from the ANC Youth League said the march has been organised to react to the long-standing incidents of racism committed by Mabuza's former employer, GEW Secure Security Company. Mahlangu said businesses would not be allowed to operate in the town east of Pretoria as they plan to shut it down.

"Those businesses in Bronkhorstspruit who have contracted this racist security company to render services to them are urged to immediately terminate their contracts with them before the march or they will be seen as being funders and indirect perpetrators of racism, and will be dealt with in the same manner as GEW Secure," Mahlangu said.

Mabuza told Sowetan that he was left humiliated after his supervisor instructed him to take off his uniform before firing him and kicking him off the office premises on New Year's Day.

He said this was after he was found to have been sleeping and smelling like liquor while on duty where he is posted at a factory in Ekandustria.

He was subsequently fired and dismissed from the company's premises.

His employer Dewet Vermaak said he had offered Mabuza his job back but that Mabuza had not responded to his offer.

"Right now, there is nothing I can do because this is now a criminal matter. His job is still there if he wants it," Vermaak told Sowetan last Friday.

Police spokesperson Captain Kay Makhubela said they were investigating but no arrests had been made.

A Bronkhorstspruit security guard was stripped down to his underwear and forced to walk 3km in the rain after his supervisor caught him sleeping on ...
News
3 years ago
Next Article