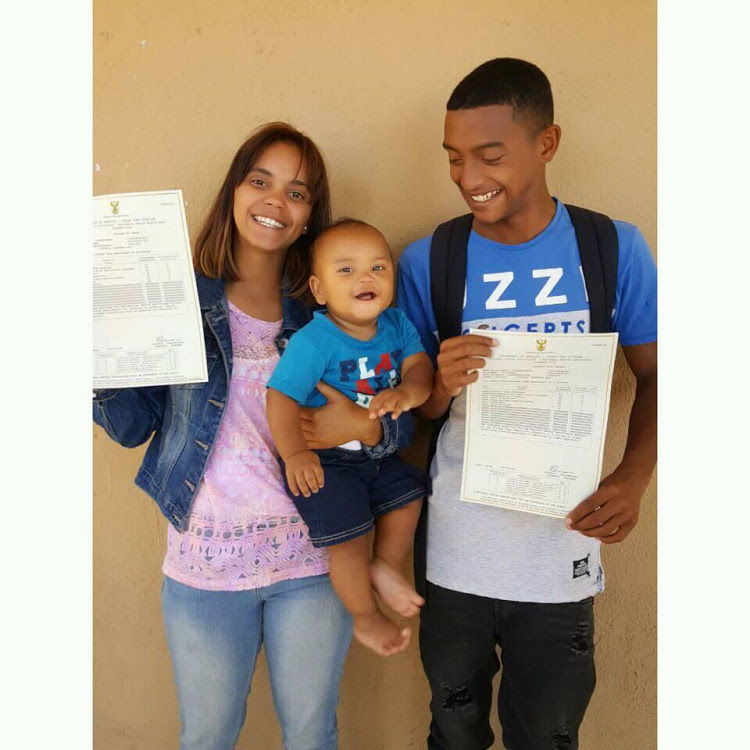 Waseema de Jager and her partner, Abid Taliep, celebrate with their son after receiving their 2018 matric results.
Image: Supplied by Waseema de Jager

Towards the end of 2017‚ while in Grade 11‚ one of the top students of Crestway Senior Secondary School in Cape Town found out she was pregnant.

Last week‚ the young woman beat the odds when she‚ and the father of her child‚ passed matric.

On January 4 2019‚ 18-year-old Waseema de Jager posted a picture of her small family on Facebook. In it‚ she and her partner‚ Abid Taliep‚ who was also her classmate‚ are holding their matric statements‚ along with their son.

“Look son‚ we did it for you‚” she captioned the photograph.

The picture has since gone viral‚ being shared thousands of times‚ with others adding their stories of beating the odds.

De Jager‚ who obtained a Bachelor’s pass‚ while her boyfriend received a Diploma admission‚ said the road to success wasn’t easy. “Our parents are strict and were very disappointed when they found out. Another challenge was going to school and letting the principal know‚” she said.

With her being an A-student‚ her teachers and principal were shocked‚ some thinking it could be the end of her school career.

Hlulani Malungani became the talk of the town after becoming one of the national top achievers in matric despite becoming blind in grade 10.
News
3 years ago

De Jager attended the first term of her matric year‚ but had to put her studies on hold in the second term to prepare for the birth of her son.

“I gave birth on April 15 and went back to school on May 15 2018‚” she said‚ adding that this was just days before the June exams.

“Catching up was tough‚ but I passed the June exams‚” De Jager said. She also passed the September exams.

“The finals were very stressful because my boyfriend lost his dad [to a brain tumour]. As the eldest son‚ he had to take care of his father’s affairs. My mom had a mild heart attack in the last week of my finals‚ but we did what we could. I didn’t think I had passed because sometimes it was so hard to cope‚” she said.

However‚ with scores of girls reportedly falling pregnant and others dropping out of school each year‚ De Jager said her pregnancy became a motivation for her to succeed.

“Others drop out because they have no one to look after the child‚ but my parents pushed me to finish and my boyfriend was my main supporter‚ even bringing work home for me from school. I knew that my success would also be my son’s success‚” she said.

“The plan is that my boyfriend and I will will take turns in going to school. While one studies‚ the other will work‚ even if it’s part time‚” she said.

De Jager wants to study nursing‚ while her boyfriend plans to get into IT.

“I couldn’t have done it without all the support‚” De Jager said.