Do you have good cause? Cyril Ramaphosa on #FeesMustFall amnesty request 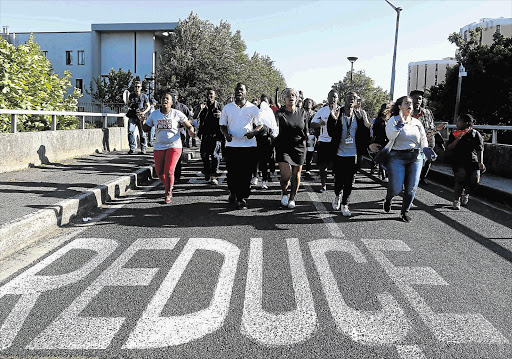 The presidency will not grant a blanket amnesty to #FeesMustFall protesters.
Image: ESA ALEXANDER

A blanket amnesty cannot be granted by President Cyril Ramaphosa but the government will consider a properly motivated application for pardons for convicted #FeesMustFall student activists‚ the presidency has signalled.

Presidency director-general Dr Cassius Lubisi on Wednesday accepted a memorandum from student activists‚ who arrived at the Union Buildings in Pretoria after marching from KwaZulu-Natal.

Lubisi referred the group to the offer extended five months ago by minister of justice and correctional services Michael Masutha to help #FeesMustFall activists comply with the procedures required for amnesty applications.

Student activists who participated in an historic walk from KZNl to Gauteng are planning to hand over a memorandum to President Ramaphosa.
News
2 years ago

The presidency statement quoted Masutha as clarifying that Ramaphosa could not interfere with judicial processes and that presidential pardons were granted in respect of convicted and sentenced persons "only on the basis of the information they provide and in circumstances where applicants showed good cause".

Masutha has proposed that students form a delegation to provide a list of all the students who have been arrested‚ charged‚ convicted or are still undergoing trial.

He said where appropriate‚ he would guide the students on the process of making the applications for a presidential pardon.

The severity of the charges concerned and public interest in these cases were among the factors the president would need to take into account before deciding whether to grant amnesty‚ said the statement.