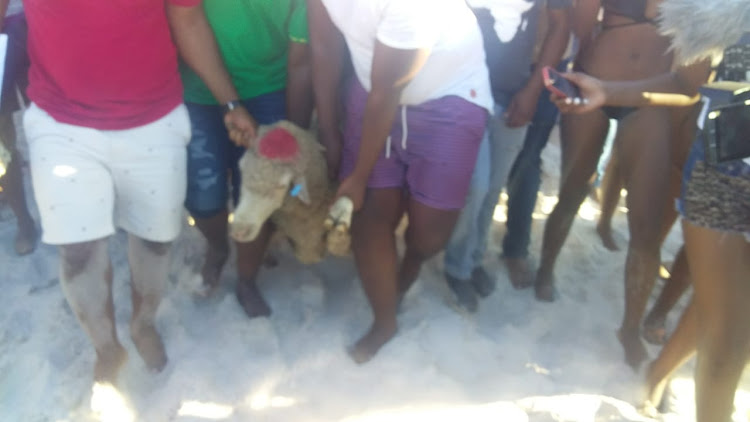 A sheep is led onto Fourth Beach in Clifton, Cape Town, on Friday December 28, 2018. Protesters cut its throat in a cleansing ceremony.
Image: Philani Nombembe

Pandemonium broke out on Clifton's Fourth Beach on Friday when demonstrators arrived with a sheep which they slaughtered to exorcise the "demon of racism".

Animal rights activists protested as the sheep arrived, one of them holding a sign saying: "End racism but don't kill the sheep."

One of the protest leaders, former Rhodes Must Fall activist Chumani Maxwele, was directing the ritual.

"We are going to untie the sheep and walk it to the ocean to waken Nxele's spirit. Nxele's spirit is along this ocean. Down with white racists, down," he shouted.

Maxwele was referring to the Xhosa warrior Makhanda, who died on Christmas Day in 1819. During the Xhosa Wars he instigated an attack against the British garrison at Grahamstown.

Maxwele then cut the sheep's throat as other protesters burnt incense. He declared: "Today, the dignity of the black people has been restored. This is an offering to our ancestors. The sheep will be slaughtered here and eaten here."

An animal rights activist started shouting at one of the protesters, allegedly telling him "the only thing you know is to kill". She was hit on the chest with a sandal by a protester and foul language filled the air.

Cape Town mayor Dan Plato consulted police officers about the slaughter, saying city officials had advised him it was illegal to kill the sheep without a permit.

A police general told him the situation would escalate beyond their control if they intervened. He explained that the protesters also made claims to their constitutional, religious and cultural rights, and it was not the police's role to make a constitutional determination.

Friday's protest - and another planned for Saturday - follow days of mounting anger about the removal of beach-goers on Sunday evening by private security guards.