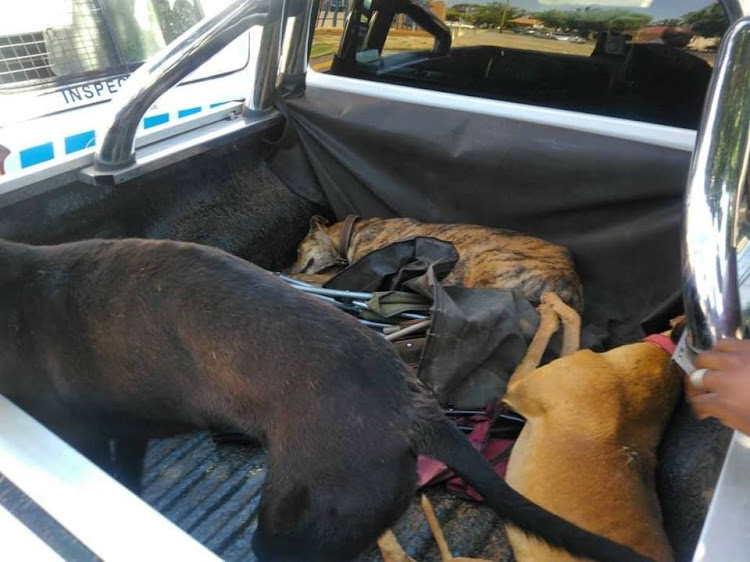 Three greyhounds were found severely dehydrated in the back of a bakkie, which was pulled over by SAPS West Rand members on December 26 2018.
Image: Supplied

The sight of a dog’s snout from under a tarpaulin on the back of a bakkie led to the rescue of three severely dehydrated and exhausted greyhounds on Boxing Day.

Two vigilant West Rand K9 Unit members were on patrol in Krugersdorp when they spotted a dog under the dark cover in the midday heat.

When the constables stopped the vehicle they found not one, but three dogs squashed between camping chairs in the black bin of the bakkie.

The dogs had collapsed in the heat.

The owner of the dogs began threatening constables David Phandlela and Chris Hlungwane, claiming to be a public prosecutor in a Johannesburg court. He said he would have the officers charged if they didn’t let him go and would “see to it that the docket never reached court”.

The four-minute video was released in May‚ leading to a ban on the product by top clothing brands such as H&M‚ Zara‚ Gap and Topshop.
News
3 years ago

However, the officers were not intimidated and called a colleague, Warrant Officer Kobus Venter, to the scene.

The dogs were uncovered and given water.

Venter, who works closely with the NSPCA to curb dog-fighting syndicates in the city, said it was 31ºC. The dogs were panting heavily and had no strength to do anything but lay down and try to cool off.

The man was charged with negligence in accordance with the animal protection act.

An inspector from the Roodepoort SPCA removed the animals from the owner.

Venter said they suspected the dogs had been used for hunting because their condition was not suitable for racing.

He said the man had travelled with the dogs from Krugersdorp to Springs and back, and claimed he was going to the Springs SPCA to “deworm” the dogs.

“That really got my suspicions up. Why travel so far on a public holiday when you know the SPCA will be closed? He really just wanted to act like he was caring for the dogs.

“The man was like a cat on a hot tin roof when we questioned him about his being a court prosecutor. He was very evasive when we asked him which court. We are making inquiries into his alleged position with the courts.”

The National Council of SPCAs (NSPCA) has urged anyone with information regarding the identity of a man pictured swinging a cat around before ...
News
3 years ago

Venter said, if found guilty, the man could receive a fine or even jail time.

The incident was posted on social media, crediting the good work of the NSPCA and officer Venter, but Venter said his colleagues should get the praise.

“The recognition really goes to my colleagues. They called me to help as I was experienced with this sort of thing, but it was the vigilance from their side that really saved the dogs.”

The Roodepoort SPCA confirmed the greyhounds were in its care and would remain there until a court ruling on their future. The SPCA said all three dogs had recovered from their ordeal.