She weighed less than a cold drink can, but baby Hope is home for Christmas 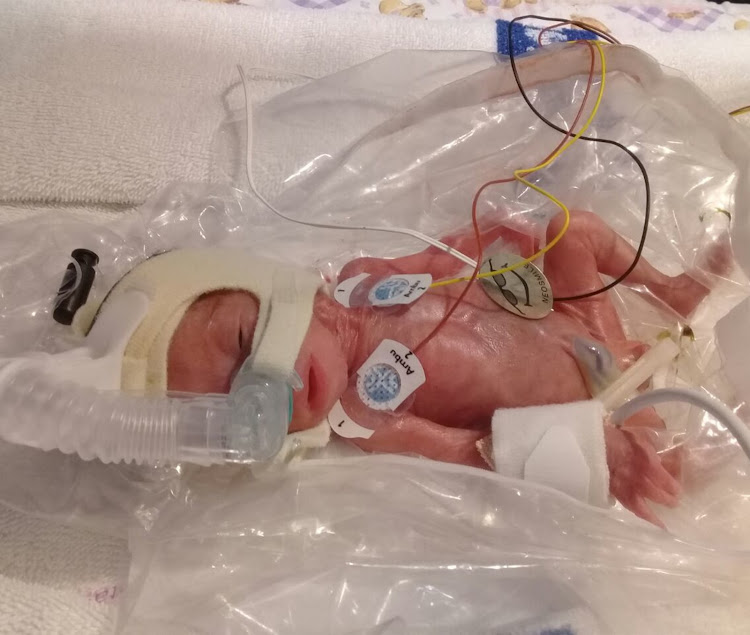 Hope Daniels, who was born prematurely weighing under 300g, has been discharged from hospital and now weighs 5.4kg.
Image: Supplied by Netcare

When Hope Daniels was born in March, she weighed less than a can if cold drink. She was, at 300g, arguably the smallest surviving premature baby in South Africa.

On Friday, nine months after her birth, Netcare Kuils River staff announced a miracle: little Hope was to be discharged, just in time for Christmas.

"During her time at the hospital, tenacious little Hope not only beat the odds against her surviving being born at just over half of the normal pregnancy term, but won the hearts of the doctors, management, nurses and other staff members at the hospital. Many of them turned out to bid Hope and her family a fond farewell," the hospital said.

When she was born near Johannesburg‚ tiny Jazeel Hlope weighed less than a jar of peanut butter – just 395 grams.
News
4 years ago

Hope was born at 24 weeks, six months into her mother’s pregnancy.

Dr Zaheera Kajee said the little miracle baby now weighed 5.4kg with satisfactory neurological, visual and hearing development. She will, however, still be given milk through a feeding tube until she gets accustomed to eating.

"As she was born so prematurely, Hope will still require special care and feeding at home, and we will have to keep a close eye on her as she grows," said Kajee.

With underdeveloped organs and a bowel rupture, there were times when it was doubtful that Hope would survive.

A week after her birth, her weight had decreased to 285g, making her one of the smallest babies to have survived, not only in South Africa but in the world.

"The team at the hospital has been amazed by Hope’s dogged determination to not only survive, but also to thrive. I think that we all steeled ourselves for the worst but, to our astonishment she not only firmly announced her presence after she was born but also went on to overcome most obstacles that such micro-premature babies usually face," said Kajee.

Dr Paul Keating, a paediatrician who practises at the hospital, said one of the major problems after birth was that it is not possible to ventilate such a tiny baby.

"We provided Hope with all of the support we could, but with such underdeveloped lungs, she had to breathe on her own. I am delighted to say that Hope did this from the start with great aplomb," he said.

Hope’s mother, Dorianne, said after years of struggling to have a child, Hope was what she and her husband had longed for.

"My husband Lesley and I have been trying to have a baby for the past 10 years, so we have been praying hard for Hope ever since her birth," said Dorianne.

"The 275 days that Hope has spent in hospital have been exceptionally hard and something of an emotional roller coaster, but we are deeply grateful to have reached a point where she is now ready to come home with us," she added.

Dorianne’s pregnancy had been unexpected.

She had fallen ill with Bell’s palsy and her doctor warned her that the medication she had to take for the condition could result in her falling pregnant.

"I laughed because after many rounds of fertility treatment over the years, I still hadn’t been pregnant and I certainly did not expect to then. Well, I am delighted to say, the doctor was right," she said.

With mounting health concerns, including pre-eclampsia, she had to have a cesarean section weeks before her due date.