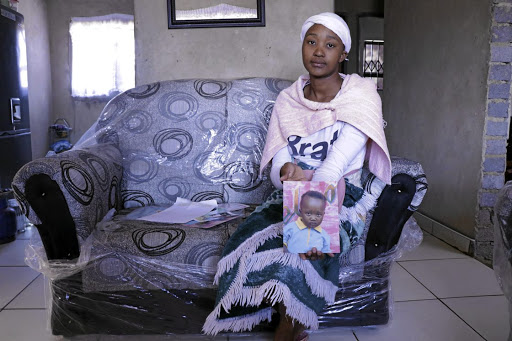 The mother of a four-year-old girl who was stabbed multiple times allegedly by her lover has spoken out about the abuse she endured prior to the cold-blooded killing of her daughter.

Mamokete Rapuleng, 19, could not fight back tears as she told of what transpired shortly before her daughter, Lerato, was butchered allegedly by her lover of three years following a tiff triggered by jealousy.

Speaking to Sowetan from her Evaton, southern Johannesburg, home yesterday, Rapuleng said the killing was triggered by an ex-boyfriend's call, who intended to buy a cake for her daughter after she turned four on December 2.

The ex-boyfriend is not the biological father of the 4-year-old girl.

"I received a call from my ex-boyfriend two days before Lerato died. My ex wanted to see Lerato and myself because he wanted to give her a birthday cake because her birthday was on December 2."

Rapuleng said things took a turn for the worst after the phone call, which came when she was with her boyfriend who cannot be named until he pleads.

"He became angry and accused me of cheating on him. I explained to him that I would not disrespect him like that.

"He didn't want to listen to me. He grabbed a knife and a screwdriver and said he was going to kill me."

She said her boyfriend stopped her from leaving the house. He became angry again on Friday and chased her around the yard with a brick in his hand.

"He chased me out of the yard and I ran to my friend's house, which is not far from his house. People in the community intervened and he left."

Rapuleng said she stayed with her friend for a few hours while her daughter remained with her boyfriend, until she was told "something terrible" had happened to her daughter.

"A neighbour came to the house and told me that Lerato was injured and that I needed to attend to her as soon as possible. But when we got to the house people refused to allow me in ... and then I was told Lerato had been stabbed."

Rapuleng described Lerato as an intelligent and innocent little girl who enjoyed singing and dancing.

Man knifes lover as her kids watch.
News
3 years ago

"It's difficult for me to come to terms with her death ... I cannot describe it."

Asked whether she had endured any abuse from her boyfriend in the past, Rapuleng said: "A lot. I tried leaving the relationship but he would not allow me. He would follow me around and threaten me.

"That's why I stayed. I just didn't think that the relationship would finally end in this manner."

The boyfriend, 22, appeared in the Vanderbijlpark magistrate's court on Tuesday where he was charged with murder.

He's expected to appear in court again for a formal bail hearing on January 3.