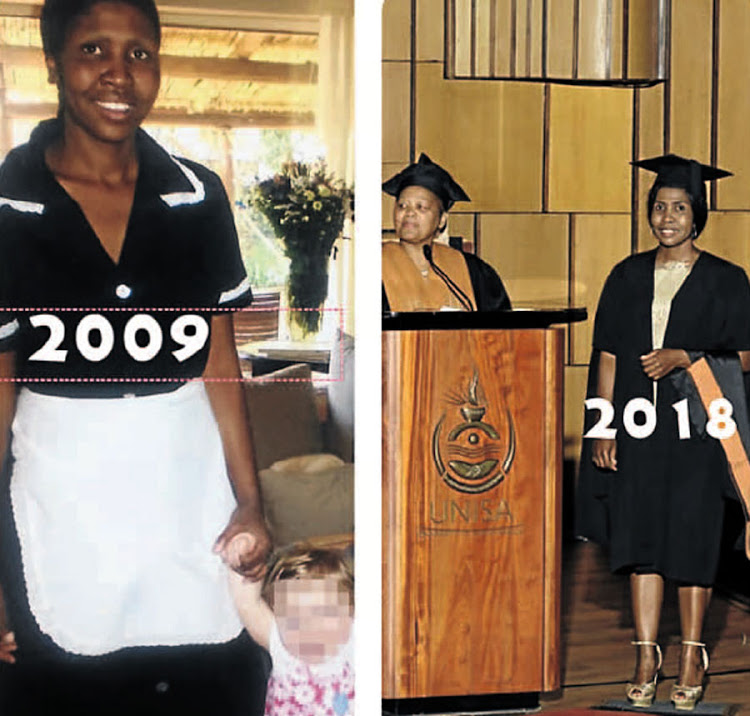 People from across the world have been flooding Ntombizodwa Mahlangu’s social media after she shared a festive spirit-inducing story of rising from being a domestic worker to graduating from the University of South Africa (Unisa).

“I’ve had people from Tokyo, Zambia and all over the world thanking me for inspiring them,” Mahlangu said.

“Someone actually sent me a message saying she was [about to] to give up on her life until she saw my post.”

The 33-year-old from Dullstroom, Mpumalanga, graduated with a BA degree in public administration and communication facilitation in September and now works for the Council for Debt Collectors as a public relations officer.

“I was clueless about what to do after matric. I had no knowledge of financial aid so I just stayed at home.”

Mahlangu said during that time she fell pregnant. She later left home to look for domestic work in Gauteng.

“What we did back then was we sat at a church until we were chosen to go and work, ” she said as she explained her earliest work experience.

She did domestic work for five years before studying for a computer certificate through Intec College.

A woman who had worked as a domestic worker for more than a decade has finally realised her dream of becoming a teacher.
News
3 years ago

Finally graduated, officially in queue of the unemployed

I wrote the last exam for my degree. The pinnacle of my dedication to my studies.
Opinion
3 years ago

“I paid for the course which was about R400 a month. I almost didn’t complete it because I could not pay for my exams. I was about to give up when my employer paid for me,” she said.

Mahlangu said she bought a small computer to practice her skills and her employer connected her to the internet and upgraded her computer.

“They realised I was passionate about studying and after the first certificate I felt that I could not just stop there,” she said.

Mahlangu said although many people look down on domestic workers, she learnt a lot that has helped her with her career in communications.

“I learned how to communicate because of that job, imagine coming fresh from the rural area where you only spoke Ndebele. Now you need to learn how to speak English,” she said.

Mahlangu said she was inspired by her family, particularly her late mother who also worked as a domestic worker.

“She passed on before I graduated but she was very happy. She told me that although she did not have money to take me to school she wanted me to study.”

She is set to study for an honours degree in communication degree next year.