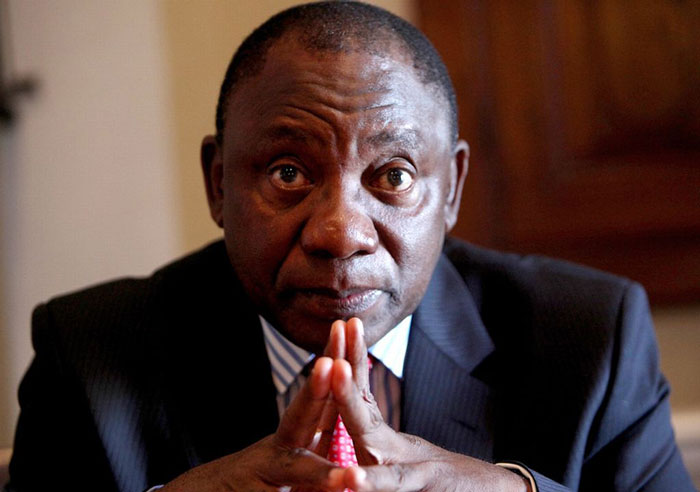 Even his detractors would concede that Cyril Ramaphosa has greatly improved the political atmosphere in South Africa since assuming the presidency in February 2018.

That said‚ Ramaphosa provided a reassuring presence and brought an impressive skills set to the position.

He was considered a safe pair of hands‚ a skilled negotiator‚ conversant in international diplomacy and economics‚ untainted by corruption‚ and a competent administrator – all qualities sorely lacking in his predecessor.

He has drawn on a substantial reservoir of goodwill – at home and abroad - from people who have been only too keen to give him the benefit of the doubt.

As a result 2018 has been a year of relatively easy wins. But that indulgence is unlikely to continue long into 2019.

Merely improving on Zuma’s shameful presidency is to set the bar of achievement extremely low. Ramaphosa must deliver substantial improvements in 2019.

He needs to improve the quality of governance. He must also combine economic progress with social justice.

And do so in the heat of a general election campaign which is likely to be fiercely contested and in which he requires an emphatic victory to give credibility to his leadership.

Unfortunately for Ramaphosa‚ however‚ all the principal barriers to his success resides within the African National Congress (ANC) itself.

The broader national fixation with the malign nature of Zuma’s presidency perhaps allowed an underlying fact to be obscured‚ namely that the country has a systemic ANC problem rather than simply a Zuma problem.

As he tries to advance his agenda Ramaphosa will confront this political reality sooner rather than later.

The country remains one of the most unequal societies on earth. Anticipated growth is below 1%‚ unemployment is catastrophically high at over 27% and 12 million people continue to live in absolute poverty.

Some department of transport employees have written to President Cyril Ramaphosa asking for an investigation into Blade Nzimande.
News
3 years ago

And if that wasn’t enough‚ the education system (the best long-term hope for inclusive economic development) is chronically under-performing‚ corruption has become all pervasive and the country attracts insufficient levels of foreign direct investment.

Zuma also left an array of state institutions and state-owned enterprises in a dysfunctional condition‚ often systematically looted by private interests around the former president.

Ramaphosa has been actively seeking to address this array of problems. His agenda is both congested and complex. He is trying to restore clean‚ orderly and functional government and to build a state capable of driving development.

He’s also working to halt and reverse the state capture and corruption of the Zuma era which is now being exposed by the Zondo commission.

But instead of having a party that’s working with him‚ the ANC often acts as a drag on his ability to fix things‚ and is often at odds with his agenda.

Why the ANC’s the problem

The ANC is a cumbersome and unwieldy instrument with which to deliver effective government. Its eclectic character hinders decision making. For fear of antagonising various factions within the broad church‚ equivocation replaces policy clarity.

Policies are replaced by bland declarations‚ a lowest common denominator approach designed to preserve ANC unity. In this sense the ANC is serving as a brake on the country moving forward in other ways too.

In addition‚ Ramaphosa’s commitment to restore constitutional rule is odds with the ANC’s culture of exceptionalism which drives its politics. A combination of its role as leader in the struggle and its huge election victories has caused the party to view itself as a unique political actor. It considers itself synonymous with the nation. And it dismisses its opponents as illegitimate or as threats to liberation of which it remains the sole custodian.

Ramaphosa’s commitment also clashes with the long-standing ANC commitment to use the state as an instrument of its will. This is an approach that long predated the Zuma presidency.

Ramaphosa’s desire for a capable state and his efforts to clean up state owned enterprises and promote efficiency and expertise fundamentally contradicts this approach. It also is at odds with the ANC practice of deploying functionaries throughout the state apparatus. This ensures that party loyalty is prioritised over anything else.

This means that Ramaphosa’s emphasis on technocratic capabilities will not be allowed to proceed unchallenged.

This brings us to the final ANC obstacle in his path.

Corruption is now deeply embedded in the ANC at all levels. In parts of the country it more closely resembles a criminal enterprise than a political party. Tender corruption‚ the rampant plundering of state assets‚ and kickbacks have become the new normal.

Deputy President Cyril Ramaphosa has stepped out of the shadows and is oozing confidence. He is traversing the country interacting with ANC ...
News
4 years ago

Attempting to turn back this tidal wave of malfeasance will lie beyond the powers of one individual‚ however well intentioned.

A sustained anti-corruption crusade will pose an existential threat to the material self-interest of ANC elites. It will generate intense resistance even if‚ for appearances sake‚ that opposition will have to be couched in pseudo-political language.

Complicating Ramaphosa’s position still further is his relatively fragile position in the ANC - a product of his narrow leadership victory in December 2017 - and the fact that he still has to deal with a divided National Executive Committee and an ANC “top six”. Both contain the very gangsterish and corrupt elements he is committed to defeating.

Ramaphosa finds himself in the unenviable position of having to use the ANC as an instrument to clean up the state when the deep-seated corruption is largely the product of the very same organisation. Noble intentions and talk of “new dawns” notwithstanding‚ nobody should hold their breath waiting for success on that front.

James Hamill: Lecturer in Politics and International Relations‚ University of Leicester This article was first published in The Conversation