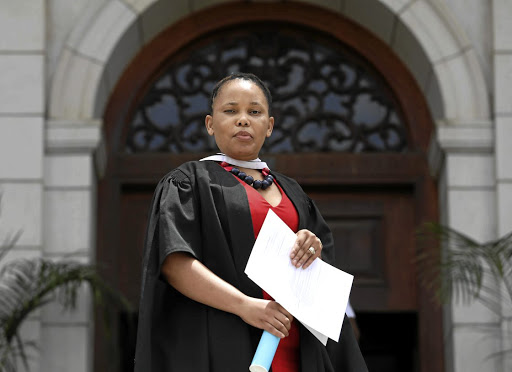 Mabuyi Mhlanga has investigated road safety around primary school areas in KwaZulu-Natal. Her findings could push the authorities in the province to consider school zones. / ESA ALEXANDER

The sudden death of Mabuyi Mhlanga's 11-year-old daughter spurred her into investigating road safety in areas with primary schools in KwaZulu-Natal as part of her civil engineering master's degree.

Yesterday, the 40-year-old mother of three graduated at the University of Cape Town in a special ceremony attended by Graca Machel, where she was recognised for being a special graduate.

Mhlanga said in 2015 her family took one car to drop her off at work before her husband took their children to school, not knowing it would be the last time they would travel together as a family.

"It is still a sensitive thing to talk about. She [her daughter] died in front of all of us while we watched and I still have to park there every day, right where she died," she said.

Mhlanga said it was unusual for their family to use one car but after her husband dropped her off, her daughter suddenly jumped out of the car and ran across the street towards her because she had forgotten her civvies day money in her mother's handbag.

"I had so many unanswered questions in my mind as to whether there was something I could have done to prevent it," she said.

Mhlanga, who is employed as a programme manager for the eThekwini public transport system Go!Durban, said when her daughter died she was planning on completing her master's at the University of Cape Town, but decided to change her research topic.

DJ pens her journey to healing

IT WAS 12.30pm on a Monday in June last year when Kaya FM presenter Nonn Botha received a call that her baby boy had died. Botha, who was working at ...
Entertainment
7 years ago

"It was a journey to find out what happened. I wanted to find out more but independently," she said.

She investigated 10 primary schools located in KwaZulu-Natal and found that there were speed bumps at most of the schools, but only on the roads that had a school gate.

Mhlanga said the roads surrounding the schools were lacking in road-safety measures such as signage and road markings to demarcate pedestrian crossings.

"I presented my findings to the deputy head [at her work] and this will possibly be used to make school zones in KwaZulu-Natal," she said.

Mhlanga said school zones are safety features that will be implemented in areas where there are schools. There will be warning signs for motorists from 2km away from the school to warn them about the high volume of children walking in the area.