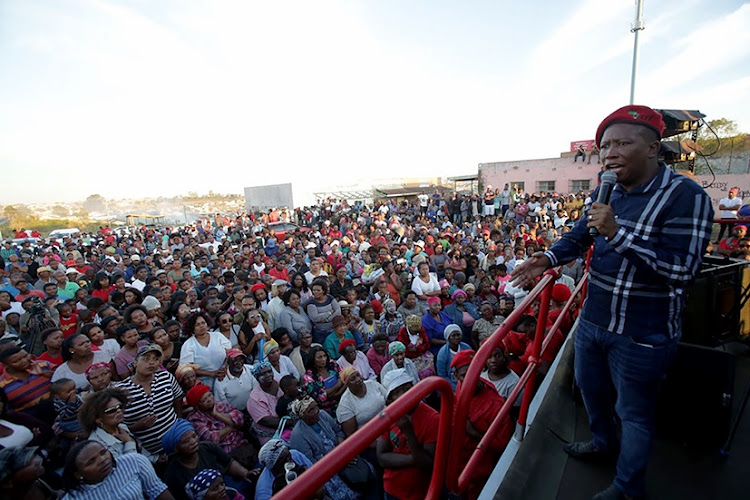 Julius Malema’s advocate has argued that the EFF leader is being deliberately targeted for criminal prosecution under apartheid-era laws for highlighting the ANC government’s failure to deliver land.

“He did no more than call out the government for its failure to provide land to the landless‚” Advocate Tembeka Ngcukaitobi argued in the North Gauteng High Court on Wednesday morning.

Malema faces separate charges under the 1956 Riotous Assemblies Act and the Trespass Act for inciting people to occupy any vacant land that they may find. He and the EFF are now challenging the constitutionality of the laws used to charge him.

EFF leader Julius Malema is expected to appear in the North Gauteng High Court on Wednesday in a case related to his call on supporters to invade ...
News
3 years ago

The EFF is seeking an order that the Riotous Assemblies Act is invalid‚ as a “remnant of the apartheid order” that violates the right to freedom of expression. Secondly‚ they want the court to set aside the decision by the National Prosecuting Authority to prosecute Malema‚ arguing that the state was driven by improper political motives.

Malema faces charges of incitement in relation to two incidents:

On 16 December 2014 in the Free State‚ when he allegedly told the EFF Elective Conference that he was “not the Holy Spirit” and could not occupy land everywhere. He urged supporters to “be part of the occupation of land everywhere else in South Africa”; and On 26 June 2016 in KwaZulu-Natal‚ when he allegedly said “if you see a piece of land‚ don’t apologise‚ and you like it‚ go and occupy that land. That land belongs to us”.

He also reportedly told his supporters that a trust fund had been set up to assist those arrested for occupying land. Those cases have been halted while the EFF challenges the constitutionality of the Riotous Assemblies Act and the Trespass Act. The NPA is opposing these applications.

Ngcukaitobi argued on Wednesday that Malema did not speak to encourage imminent violence with his utterances‚ nor did he encourage the occupation of houses.

He has further told the Pretoria-based court that the Riotous Assemblies Act had only been used to prosecute cases similar to the one against Malema three times in the democratic era‚ and strongly suggested Malema was being “singled out” with the “unique” case against him.

He said the “state has deliberately chosen to charge Mr Malema”.

The Pretoria High Court will on Thursday hear an application by Economic Freedom Fighters (EFF) leader Julius Malema in which he is challenging the ...
News
3 years ago

Ngcukaitobi further argued that the constitution entitled Malema to freedom of expression‚ and stressed that his remarks did not incite imminent violence and were therefore legally protected.

He argued that the right to freedom of speech was pivotal in a functional constitutional democracy‚ particularly when it came to the “expression of unpopular views” which did not fall within the definition of hate speech.

“You should never imprison people for speaking‚” he said.