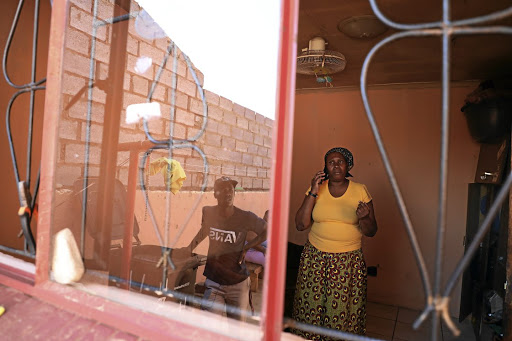 Thembisile Mazibuko hid under her bed when gunmen stormed into her yard and killed her brother, Sipho, and four of his friends in Katlehong last week.
Image: Thulani Mbele

Five men were murdered execution-style at a friend's house in an alleged drug turf war.

Four of the men were shot in the head through pillows and their bullet-riddled bodies were found in a backroom at a house in Phumula, Germiston, on Thursday.

According to the men's families, they were all friends who spent time together smoking nyaope at the house.

Police have launched a manhunt for the killers.

Two men were shot dead in a drive-by shooting outside a Cape Town secondary school’s matric ball on Friday.
News
3 years ago

Yesterday the families met to mourn the tragic killing and also plan their joint burial.

The house where the slaying occurred is located in a quiet area with most homes hidden behind high walls.

A neighbour who saw the alleged assailants said they arrived carrying big guns and parked their car near a tavern.

"They looked like they were patrolling around the tavern close to the house.

Later on when I heard there was a shooting, I realised those three men could be the killers," said the neighbour.

Inside the yard where the men were massacred, Thembisile Mazibuko, Sipho's sister, relived the horror as she cleaned the blood-soaked mattresses and pillows.

She was in her bedroom in the main house around 11pm when she heard gunshots.

"I hid under the bed when I heard the sounds because I realised they were coming from the back of my house.

"I stayed still because I was scared, thinking I would be next."

A neighbour of one of the 11 people who were killed in Sondela, Rustenburg, has detailed how the young man was captured by a mob and killed while ...
News
3 years ago

Mazibuko said she was with her 16-year-old son in the house who also ran into the bedroom to hide. "The shots persisted for about 15 minutes non-stop with about 16 shots."

She said the shots paused for a few minutes then she heard about 10 in the vicinity of the gate.

"I waited for another 10 minutes, then I heard the tenant who lives in one of the backrooms call out my name.

"As I walked towards the rooms, I saw people lying still on the ground. I immediately ran to the gate where I found a neighbour who was also screaming because there was one of my brother's friends who had been shot in the head multiple times in a pool of blood."

Mazibuko said they initially found her brother and two friends on the floor.

When police arrived, they discovered a fourth body hidden behind the bed.

Family members told Sowetan that one of deceased sold drugs which he kept in the room and this had created tension between him and other drug peddlers.

Monde's father, Monwabisi Cubeni, said: "I arrived at the house and found him lying close to the gate. All I saw was blood, so I just took him into the car and his younger brother drove to the nearby hospital but sadly he died in my arms on the way."

Cubeni said it was painful to watch his son take his last breath when he still expected so much of him.

Cubeni said Monde, who worked for Transnet, had just bought a house in Leondale, Germiston, and was planning to move there.

Two men have been shot dead in what is believed to be a home invasion gone awry in Durban North on Tuesday evening.
News
3 years ago

"I was not aware he was even out. He came back from work that day and took his food and went to his room and that is the last time I saw him [alive]" he said.

Beauty Navess, who lost her son Lebohang, said she knew he smoked nyaope but she had hoped he would quit.

"He had wounds on his head like the others. He was facing up, although I was hoping to wake him up but it was too late," she said.

Police spokesman Captain Mavela Masondo said the motive for the killing was not yet known.

"However, because of the seriousness of the case, we have moved it from the station to be taken over by senior detectives at provincial level," he said. He added that the team deployed will be working tirelessly to get to the bottom of the killings.