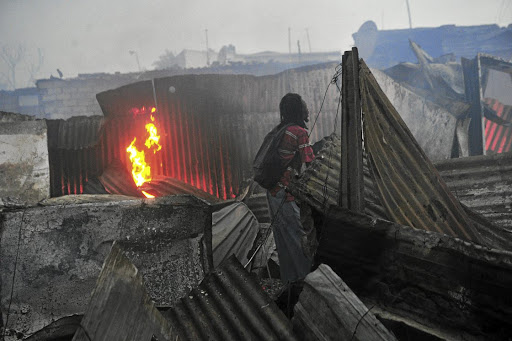 A resident watches as his shack goes up in smoke in Alexandra, Johannesburg, yesterday. / Veli Nhlapo

Hundreds of people were left homeless in Greenville, Alexandra, northern Johannesburg, yesterday after a fire swept through their shacks.

An estimated 150 shacks went up in flames leaving about 400 homeless.

Residents said the fire started at one of the shacks not far from London Road at about 1pm and spread through the area.

At 6pm, firefighters were still battling the blaze as many residents were trying to salvage what was left of their possessions.

Zameka Sigwili said when she saw some smoke in her shack she thought it was an electric cable that was burning.

She rushed to switch off the electricity not knowing the worst had just started.

"When we got out the flames were actually here. Our neighbours came out to help us take what we could move out of the shack in a rush. We could not take everything.

"We were only able to take out the clothes, fridge, television set and the wardrobe as you can see. Other things went up in flames. Our ID documents, everything," said Sigwili.

"When we arrived there was a blaze everywhere. Obviously, the fire was spreading to the other side [of the road]. The major problem was that there are no fire hydrants [in the area] . Fire engines had to go in and out, replenish from about a kilometre away and come back. We had three fire engines doing that for about an hour," said Radebe.

Last night, disaster management was on the scene to capture data and help the affected residents. No injuries or fatalities were reported at the time of going to print last night.

Zingisile Sandla was one of the people who tried to put out the fire when it started.

"I went out to help with water buckets. Only one shack was on fire when I went out to assist. But because the tap water is far so the fire gained momentum and burnt more shacks. My shack burnt down too," he said.

He said he was only able to take a few items such as ID documents and the rest of his possessions went up in flames.