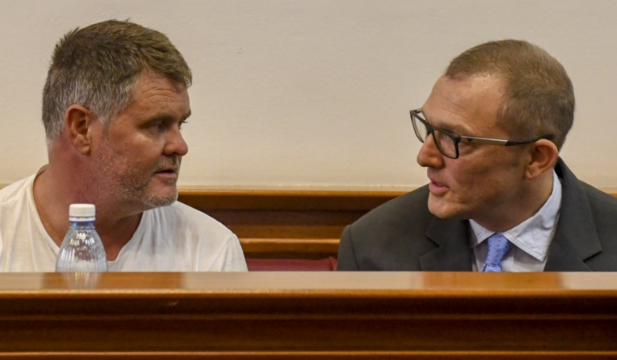 Dr Kevin Stoloff in the high court in Cape Town with Jason Rohde in February 2018.

Jason Rohde’s advocate was on the receiving end of a severe wigging on Thursday from the judge who found the businessman guilty of murdering his wife, Susan.

Judge Gayaat Salie-Hlophe suddenly adjourned sentencing proceedings after accusing Graham van der Spuy of “taking your finger and throwing it in the air”.

She left the bench advising Van der Spuy to consult Rohde’s attorney‚ Tony Mostert‚ about the way he was addressing her.

The clash came as Van der Spuy was questioning Rohde’s psychiatrist‚ Dr Kevin Stoloff‚ who said the former head of Lew Geffen Sotheby’s International Realty displayed none of the hallmarks of someone who would kill his wife.

Van der Spuy asked Stoloff to testify in detail about what the psychiatrist called a “severe depressive episode”‚ Rohde experienced early in February 2018‚ when he became suicidal and was admitted a clinic in Cape Town’s southern suburbs.

During his hospitalisation at the Crescent Clinic in Kenilworth‚ Rohde failed to attend court and Stoloff submitted what he termed a “sick note”.

He compared the murderer’s health to someone who had suffered a heart attack or stroke‚ and said it was out of the question that he could have attended court.

Van der Spuy told Salie-Hlophe he wanted to explore the incident because Rohde’s compliance with court orders‚ and his conduct during the case‚ was a significant mitigating factor when it came to sentencing‚ and he was anxious that his client should not be prejudiced by his failure to appear in February.

He pointed out that Rohde’s failure to appear in February was one of the reasons the judge had denied bail after Rohde’s conviction on November 8.

Jason Rohde, the businessman convicted of murdering his wife, arrived at the high court in Cape Town on Wednesday to listen to his daughters giving ...
News
2 years ago

But Salie-Hlophe told him this was not a bail application and asked him to move on with his examination of Stoloff. When Van der Spuy requested clarification on whether he could continue with his line of questioning‚ an argument developed and the judge left the bench. It was not clear when proceedings would resume.

Earlier‚ Van der Spuy said that in addition to Stoloff he would call Rohde’s eldest daughter‚ Katie‚ 20; his mother‚ Brenda Rohde; and two friends and former colleagues to give evidence in mitigation of sentence.

Stoloff said Rohde had been under his psychiatric care since September 2016‚ and the last time they met was in the hospital wing at Pollsmoor Prison on November 13‚ when Rohde was “extremely concerned” about his three daughters – the others are 18-year-old twins – and mother.

“He did not have symptoms of severe depression and was not suicidal. He expressed some hopefulness for the future‚” said Stoloff.

“This was in stark contrast to his state of mind in January and February‚ when he was severely depressed‚ suicidal‚ and significantly cognitively impaired.”

In getting to know Rohde‚ said Stoloff‚ he had formed an impression of a man who was “a somewhat private person who has been ambitious and successful. Prior to the murder he would have been someone who I would have described as having more than adequate self-esteem.

“He is even-tempered. He is not volatile or unstable. He does not seem to be controlling‚ there is no history of rage or physical violence.

“His approach to confrontation has always been to walk away or back down‚ rather than escalation.

“He is consistent‚ kind‚ has a capacity for empathy‚ does not externalise blame‚ and this is evidenced by his feelings of enormous guilt and enormous remorse‚ in the sense that he feels responsible for Mrs Rohde’s death as a result of his extra-marital affair.

“In my opinion‚ he fits none of the psychiatric‚ psychological or personality criteria of men who kill their spouses. It would have been totally out of character for Mr Rohde to have committed the acts of which he has been found guilty.”

Stoloff said he was concerned about Rohde’s psychiatric fragility‚ and said this should be borne in mind when a decision was made about where he would be imprisoned.”