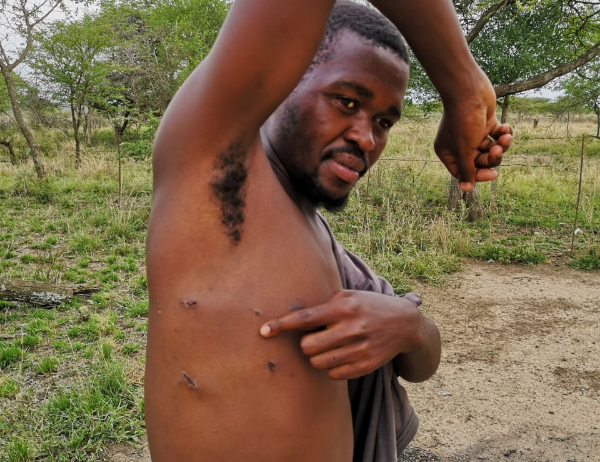 Sabelo Masondo shows the wounds inflicted on him by a lion.
Image: Supplied

The scars on Sabelo Masondo’s chest will be a lingering reminder of the moment he escaped from the jaws of a lion.

The 27-year-old was attacked by the big cat while walking along a dirt road near Emagcekeni village in Gluckstadt, northern KwaZulu-Natal.

The near-fatal incident has confirmed rumours swirling in the area for weeks that a lion has been prowling the veld outside the village. While Masondo recovers, the search for the marauding predator continues.

Masondo said that he had been walking along a gravel path last week when he spotted the lion. “It immediately darted towards to me and I quickly ran to a nearby fence," he said.

"It grabbed me on the trousers with its paws. My trousers were torn and it bit me with its jaws under my armpit before I could manage to jump over the fence,” he said.

Lion on loose darted and captured

A lion spotted by motorists along the N4 near Marloth Park in Mpumalanga has been darted and captured.
News
3 years ago

Seriously wounded and bleeding, Masondo ran for his life to a nearby homestead for help. They called the owner of the nearby Mawana Game Reserve. “He came and took me to the Gluckstadt Clinic," said Masondo.

"From there I was taken to the Vryheid Hospital.  I have been in and out of hospital and I am going back there on Friday.”

Masondo is still coming to terms with what happened. “It was the first time that I had ever seen a lion. I only saw it in pictures. I am still shaken and afraid, even now.”

The self-employed photographer, who makes a living by taking pictures at local traditional ceremonies, said the lion had continued up the dirt road and he did not know what happened to it afterwards.

Ezemvelo KZN Wildlife spokesman Musa Mntambo said their search for the cat has yet to bear fruit. "We have been searching the area where the lion was last seen. We did not succeed, so now we are waiting for the community to alert us if they see it,” he said.

Mntambo added that sightings of the animal revealed that the lion was likely male. “Mawani Game Reserve is also involved and it is through them that we know that it is a male lion. The last area of sighting was Gluckstadt,” he said.

“If they see the lion, depending on the distance, they must remain calm and slowly move backwards. They must not crouch but try to make themselves big,” said Mntambo.