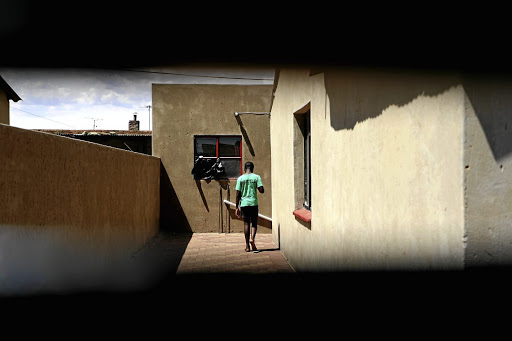 A window was broken as people tried to stop a man who was allegedly stabbing his lover inside a room they were renting in KwaThema, Springs, on the east rand.
Image: SANDILE NDLOVU

An eight-year-old boy allegedly stabbed his stepfather several times as he tried to protect his mom, who was being attacked by the man with a knife.

The boy's effort was however futile, as his mother succumbed to her injuries.

Police said the 41-year-old man stabbed his 35-year-old lover in front of her three children, aged 10 months, four and eight years, in their rented room in Tornado in KwaThema, Springs, on the east rand, on Monday morning.

This happened as the country is observing 16 Days of Activism for No Violence Against Women and Children.

A neighbour, who did not want to be named, said the boy came out of the house crying as he ran to the police station, about a kilometre away.

"The boy was running very fast . crying out loudly. I saw people running in the direction of the house," he said.

The neighbour said he also went to the house, where he found people trying to break down the door. "Someone came with a spade; I took it and broke the window.

"I could not believe my eyes when I pulled the curtain. The toddler [10 months] was holding on to his mother, crying. He was soaked in blood.

"The mother was trying to move but she was in a lot of pain. The four-year-old child stood next to his bleeding mother, motionless."

The man said the suspect, who was still inside the room, was not bothered by people who had gathered in the yard calling on him to open the door.

"He just picked up the toddler and sat on the bed. The child looked like he had been pulled out of a pool of blood."

The neighbour said police responded promptly, and that the woman was certified dead on the scene by paramedics who arrived soon after the police.

Another neighbour said she heard screams before the attack. "I heard people screaming but I thought it was children playing. I realised that something was wrong when the boy ran out of the gate screaming and crying. He was saying, 'that man is killing my mother... my mother is dying'. I then went to the house."

The woman said she was shocked when she saw the child's stepfather being moved out on a stretcher.

"He was stabbed by the young boy who was trying to protect his mother," she said.

She said the couple moved into the rented room only four days before the incident.

Police spokesperson Captain Mavela Masondo said the children were taken to a place of safety until their relatives could be traced. "The suspect stabbed the victim several times in full view of her three children. It is further alleged that the deceased's eight-year-old son took out a knife and stabbed him multiple times, trying to stop him from further hurting his mother."

The man is under police guard in hospital. He will appear in the Springs magistrate's court after recuperation.

Hours before a troubled former train driver shot his three children dead‚ before turning the gun on himself‚ he took to his Facebook page where he ...
News
3 years ago
Next Article