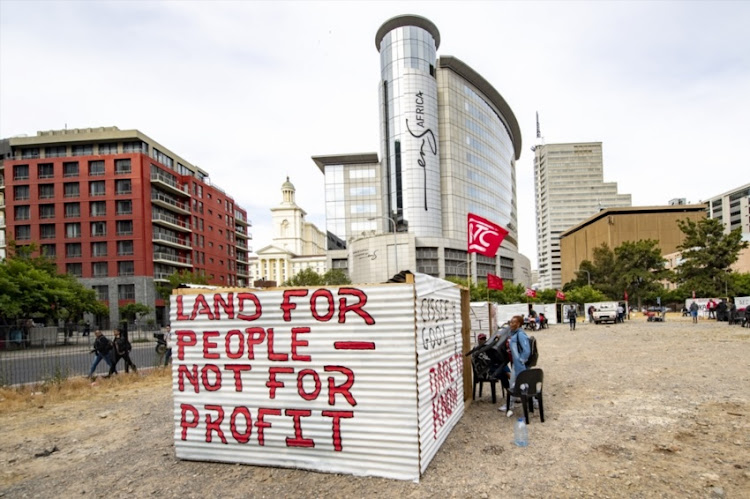 A handful of protesters erected shacks in Cape Town's CBD yesterday and called on the City of Cape Town to overhaul its social housing policy to allow the poor to live in the city.

The protesters, who built 11 shacks on an empty plot controversially sold by the city to developer Growthpoint, said they had occupied the land to show their unhappiness about the sale. Site B, which was sold in 2016 for R86.5m, is the subject of a city forensic investigation following complaints that the auction was botched.

A joint statement by Reclaim the City, the Social Justice Coalition and the #UniteBehind civil society coalition said they had built the shacks to "reclaim" Site B. "Public land should never be sold in a housing crisis - and if it is, then the money should be used for basic services or affordable housing for poor and working-class people."

Bevil Lucas from Reclaim the City, who lives at the old Woodstock Hospital building that has been occupied by activists said the shacks were a symbolic way of expressing unhappiness about the land sale.

He said it was a shame that many poor people who worked in the city centre, including construction workers, could not enjoy the fruits of their labour.

The National Assembly has adopted the constitutional review committee's report recommending a constitutional amendment to expropriate land without ...
News
2 years ago

"Instead of addressing social housing in the inner city, the city is showing complete disregard for its poor people and is giving huge discounts to very wealthy developers who have no interest in the poor," he said. "Many people who grew up in shacks have to raise their own families in shacks due to failure by the city to adequately address social housing."

"In Khayelitsha alone there are many informal settlements that are not serviced at all. The discount would have gone a long way if it was used to improve the lives of the poor. Many of us don't even want to move into the city centre per se . we just want a better life where we are. Many women end up being raped because they have to travel a few kilometres just to get to a toilet."

Nandipha Qegu, a mother of two, said living in an informal settlement put her two children at risk of diarrhoea, due to poor sanitation. "If I live close to town I can just go down the road to look for a job at the Waterfront. In Khayelitsha I have to get up at 4am to catch a train. This puts my life in danger as there are lot of thugs that rob people at that time. I would also love to live in town and experience the better life that rich white people enjoy."

Growthpoint's Nadine Kuzmanich was in a meeting yesterday. Growthpoint has said it plans to develop a skyscraper on the site that "aims to be a world-class, timeless, innovative, sustainable building .".

Government should control how land is shared says the Economic Freedom Fighters.
News
2 years ago
Next Article