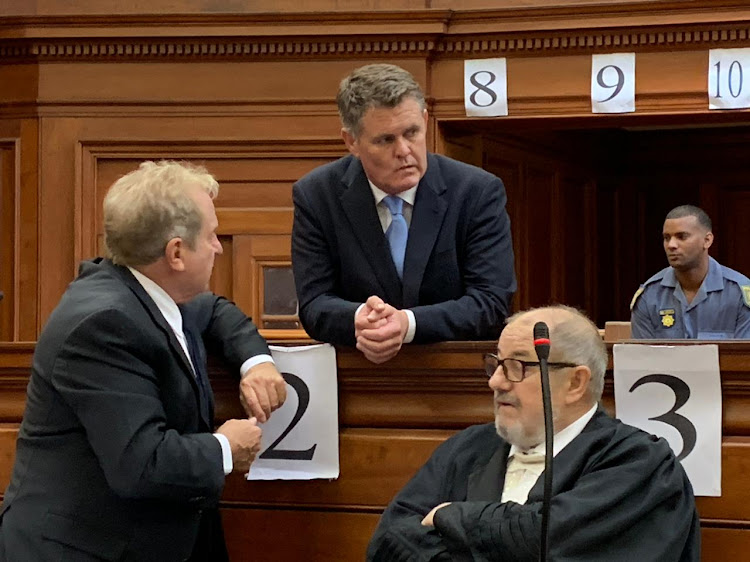 Jason Rohde in the dock at the high court in Cape Town on December 5.
Image: Anthony Molyneaux

Jason Rohde, the businessman convicted of murdering his wife, arrived at the high court in Cape Town on Wednesday to listen to his daughters giving evidence in his sentencing proceedings.

Rohde has been in Pollsmoor Prison since being convicted by Judge Gayaat Salie-Hlophe on November 8. He murdered his wife Susan in their hotel room at Spier in Stellenbosch in July 2017.

Jason Rohde handcuffed and in running shoes arrives for sentencing proceedings. BUT load shedding halts proceedings and he is led down to cells again. #JasonRohde #Rohde @TimesLIVE pic.twitter.com/HXPWaaGtm5

He arrived in court handcuffed and wearing a suit with running shoes. He was hoping to hear his daughters, but loadshedding halted proceedings and he was led back down to the cells.

His daughters - 20-year-old university student Kathryn and twins Josie and Alexandra, who wrote matric this year - were anxious about what would happen to them with their father in jail, Rapport reported.

Rohde, the former CEO of Lew Geffen Sotheby's International Realty, was also convicted of  attempting to defeat the ends of justice by staging the murder as a suicide.

Former property company CEO Jason Rohde was found guilty in the high court in Cape Town on November 8 2018 of murdering his wife Susan and attempting to make it look like a suicide.

Judge Salie-Hlophe found that Susan's death was consistent with manual strangulation and asphyxiation through external airway obstruction, such as smothering with a pillow.

She found that Rohde had tried to make it look as though his wife had hanged herself with the cord of a hair iron from a hook on the back of the bathroom door.

The judge ruled that Rohde’s testimony “was fraught with inconsistencies and he was economical with the truth”.

Rohde's daughters fearing for their own future - report

Convicted wife killer Jason Rohde's daughters are fearing for their own futures‚ according to a report drafted by a social worker.
News
3 years ago
Next Article