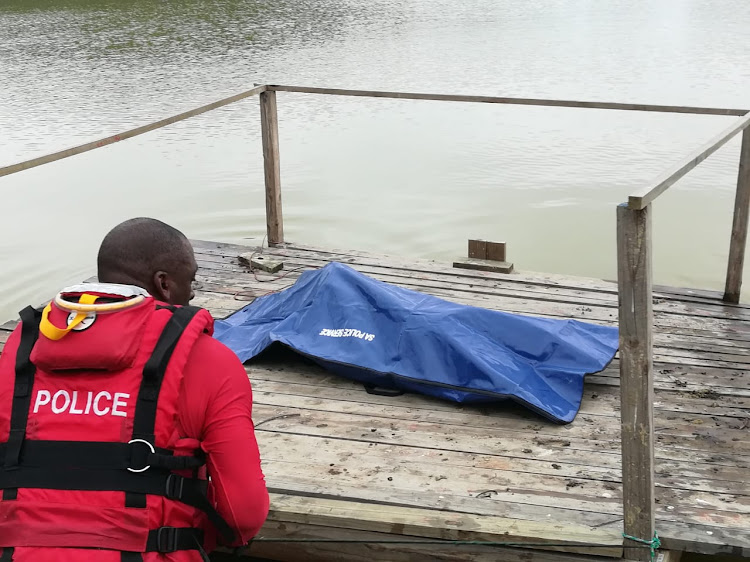 A diver from the police search and rescue unit stands over the body of 68-year-old Thanalatchmee Durugan, who was killed and dumped in a dam at the Silverglen nature reserve, south of Durban.
Image: Supplied

An elderly Chatsworth woman's body was found floating in a dam several days after she was reported missing.

What befell 68-year-old Chatsworth woman, whose body was found floating in a dam several days after she was reported missing, will become the focal point of a police probe into her death.

The body of Thanalatchmee Durugan was pulled from the reeds in the Silverglen nature reserve dam on Monday December 3.

Specialist divers from the police search and rescue unit pulled her decomposed remains from the muddy water. She went missing on November 29.

Police divers had the grim task of pulling the decomposed remains of a man from the Nonoti River near Darnall‚ north of Durban.
News
3 years ago

Sources with close knowledge of the investigation, who spoke to TimesLIVE on condition of anonymity, believe that her son may be able to help police.

He went missing at the same time as his mother.

The woman's cellphone was tracked to the dam where investigators found the family car abandoned.

Police spokesperson Thulani Zwane said that detectives had concluded that Durugan was murdered.

“She was reported missing together with her son, Sagren Pillay, and police have intensified their search of the 46-year-old son,” he said.