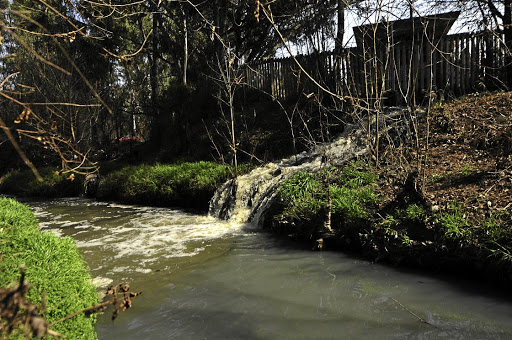 The Gauteng government has set up a war room in a bid to stave off a water crisis.

Driving the move is a report that lays bare the water crisis facing SA's economic hub.

"This is a crisis. We have been given the instruction that Day Zero cannot happen in Gauteng. That comes from government. We have been told these facilities must be brought back on line‚" said Col Andries Mahapa‚ commanding officer of 1 Construction Regiment‚ the army unit working to repair treatment plants on the Vaal River.

The Gauteng government has set up a war room in a bid to stave off a water crisis. Local, provinical and national government officials are working with civilian and military water security experts. Their mission is to reduce Gauteng’s water consumption and to fix collapsing sewage plants.

- Gauteng residents each consume more than 300l of water a day‚ the highest rate in the country and nearly double the international average;

- The province's population is growing by nearly 300‚000 a year; Raw sewage is the biggest contributor to water pollution in Gauteng;

- Rand Water is forced to draw more water than its department of water and sanitation licence permits;

- and Drinking water from the Lesotho Highlands Water Project is used to flush pollution out of the sewage-contaminated Integrated Vaal River System.

Mahapa said that of the region's three water treatment plants‚ two were not operational and one was semi-operational. None of the 44 pump houses were working.

Vandalism‚ theft and the lack of money for maintenance and purification chemicals have collapsed the sewage infrastructure.

During a visit to the area this week‚ a Sunday Times team found soldiers guarding sewage facilities. Army engineers were repairing pump houses from which faeces flowed. Some troops used construction vehicles to remove solid sewage from overflowing processing tanks; others drained pump houses that were submerged in faeces.

"Once all of this is out we will have to get in there‚ take out the remains of the broken pumps‚ which have been vandalised‚ and install new ones‚" said Staff Sgt Mandla Dickson at the Sebokeng water treatment plant.

"What we are doing now is exactly what we did while on peacekeeping missions in the Democratic Republic of Congo. The damage that we encountered there‚ which was from years of war and neglect‚ is equivalent to what we are finding here."

Faeces, condoms drive people out of homes
News
3 years ago

The soldiers have been deployed to 44 collapsed facilities. They are supported by armoured vehicles. Last month thieves killed two security guards at the Meyerton water treatment facility.

"These facilities are now military zones‚" said Mahapa‚ whose 200 troops will soon to be reinforced by 300 more. "We just pray we do not have to shoot anyone."

He said the army was working with the department of water and sanitation‚ municipal officials and engineers.

Makhura told the Sunday Times that rebuilding and repairing 44 sewage pump stations that were leaking into the Vaal River needed to be done immediately.

"If Emfuleni's issues are not addressed the disaster will impact beyond Gauteng."

Mike Muller‚ a former water affairs director-general who helped write the water security plan‚ said the research showed that though sewage pollution was increasing‚ R15bn was being budgeted to address acid mine drainage‚ "which is not the greatest pollutant".

"Concerning is the vast amount of clean water that is sometimes used to flush pollution from the rivers‚ which reduces Gauteng's water security."

He said careful decisions needed to be made on where to spend money.

The report's co-author‚ Gillian Maree‚ said that if the water security issues were dealt with now they would be manageable.

"The plan looks at what it means to be water secure‚ which is not only about having enough water during a drought‚ but also having functional waste-water treatment works‚ reducing risks from flash floods because of poor stormwater systems‚ and having sufficient quality and quantity of water.

"Until the Lesotho Highlands Water Project phase two comes on line‚ we face a water supply risk. With Gautengers consuming on average 300l per day we must be careful with our water."

Rand Water spokesperson Justice Mohale said the organisation could not increase its water withdrawal levels from Lesotho until phase two of the project came on line in 2026.