Image: Thuli Dlamini Former president Jacob Zuma leaves the Pietermaritzburg High Court to address his supporters after court proceedings against him on November 30 2018.

Former president Jacob Zuma cut a different figure from his usual charismatic self when he entered the Pietermaritzburg High Court on Friday morning.

Zuma did not greet his loyal supporters, including former North West premier Supra Mahumapelo and Umkhonto weSizwe veteran Carl Niehaus, in the public gallery as he took his seat in the dock.

He requested a bottle of water before court proceedings began and thereafter remained restless as the state and his defence discussed the way forward for the criminal proceedings against him.

At times, the 76-year-old clutched his head.

Defence advocate Michael Hellens’s address to the court was interrupted by a member of his team, who informed him that Zuma was unwell.

"I am going to be brief because my client is unwell," Hellens told the court.

Afterwards, he said that his client was suffering from low blood pressure.

“It could be the heat as well. He has had a Coke now, so maybe he will feel better.”

About 20 minutes after the matter was stood down, Zuma went to address his followers.

Hellens added that the state was in for “a fight” when the matter went to court next year.

“The gloves are coming off,” he said.

The court earlier heard that the National Prosecuting Authority and defence had come to an agreement that the criminal proceedings against Zuma would be postponed to May 20.

Over the next few months, the state and defence will have to file papers ahead of the proceedings.

Zuma will have to file his heads of argument by April 18 and the state by May 10. The former president faces 16 charges that include fraud‚ corruption and racketeering.

These relate to 783 payments which he allegedly received as a bribe to protect French company Thales from an investigation into the controversial multi-billion rand arms deal. 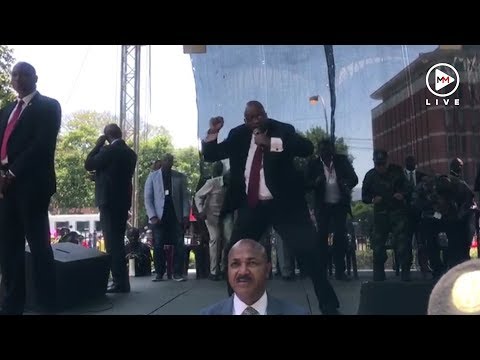