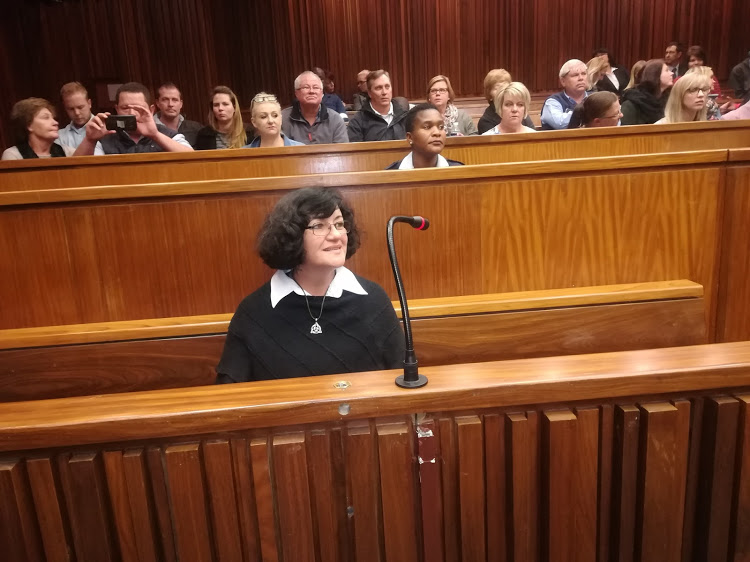 High school teacher Marinda Steyn in the dock of the High Court in Johannesburg where she was sentenced to a lengthy jail term for her involvement in a killing spree on Gauteng's West Rand.
Image: Nomahlubi Jordaan

Killing a semi-retired pastor was an adrenaline rush - scary but exciting‚ convicted murderer Marinda Steyn told the High Court in Johannesburg on Friday.

Steyn‚ who is serving 11 life terms‚ was dressed in a correctional services outfit when she took the stand in defence of her “best friend”‚ Cecilia Steyn.

Cecilia‚ Zak Valentine and Marinda Steyn’s daughter Marcel Steyn are accused of murdering 11 people between 2012 and 2016. All three have pleaded not guilty.

Inhaling deeply‚ she looked down and asked: "Do you really want me to answer that even if it may be offensive to people?"

"It was an adrenaline rush to be there. Scary but exciting at the same time. To actually do it‚ I felt a release. It felt like something I waited my whole life to get rid of‚" she said.

"Is that why you murdered again?" Roberts asked.

Steyn replied: "No‚ it was only like that the first time."

Bendixen was attacked by Marinda Steyn and Zak Valentine with a small axe and stabbed multiple times at his home in August 2012.

Le Roux Steyn‚ the man convicted of the Krugersdorp murders‚ implicated his sister in the killings because he did not want to go down alone‚ his ...
News
3 years ago

During proceedings Valentine looked tired‚ with his head hung low.

Steyn also testified about meeting financial broker Antony Scholefield four days before he was murdered. She took out a life insurance policy from him before his death.

Scholefield was lured under false pretences to a flat in Krugersdorp in May 2016.

Steyn told the court that Scholefield was "shocked and outraged" when she produced a firearm and ordered him to lie down.

"At first he thought it was a joke."

Roberts argued that Scholefield was chosen as a victim because the group had a criteria of selecting wealthy people because they needed money.

"He came to mind because I knew him already and because I thought he was wealthy. If he was a person I felt sorry for I wouldn't have chosen him.

"I did not feel sorry for him at that moment. It made it easy to kill him‚" she said.

Scholefield was strangled and his body stuffed into the back of his car‚ which was then abandoned close to a primary school in Krugersdorp.

Roberts then showed Steyn photographic evidence to look at.

He pointed out a picture where a person wearing a hoodie withdrew money at Delta Spar in Krugersdorp West. Steyn agreed that it was Le Roux.

On that day‚ R16‚600 was withdrawn from Scholefield's account.

Roberts also showed her a picture of her daughter‚ Marcel‚ approaching a Nedbank ATM.

He said a state witness had testified that he took Marcel to the ATM to withdraw cash.