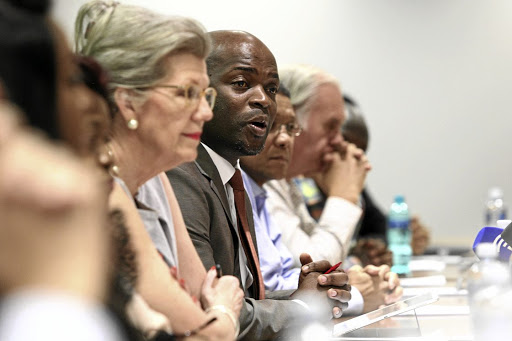 Tshwane mayor Solly Msimanga will again be seeking the suspension of city manager Moeketsi Mosola when the council sits today.

Msimanga said he would table a report asking council to issue a notice of intention to suspend Mosola on multiple allegations of misconduct.

The pair have been at loggerheads since the R12bn GladAfrica contract scandal became public months ago.

Msimanga, who briefed the media yesterday in Tshwane, said he had reasonable cause to believe that Mosola had contravened the code of conduct for municipal staff members, which needed to be brought to the council's attention.

Msimanga accused Mosola of failing to act in the best interests of the municipality and compromising its credibility and integrity.

"[Mosola] made a number of public attacks on the executive mayor in person and compromised the credibility and integrity of the office bearers and the institution of the municipality.

Solly Msimanga has refused to be drawn into another public spat with his city manager Moeketsi Mosola.
News
3 years ago

"He made public allegations of criminal behaviour against the DA, which he failed to deny, substantiate, report to competent authorities or act upon in a lawful manner, despite being given an opportunity to do so," Msimanga said.

"In order for a fair process to unfold, there are grounds to suspend him on full pay based on allegations of intimidation and bullying against him."

Msimanga said the report he will be presenting to council was separate from law firm Bowmans' report on GladAfrica. Last week, Msimanga wrote to DA leader Mmusi Maimane asking for his intervention to remove Mosola or he (Msimanga) would leave office.

In the letter, Msimanga detailed the problems that Mosola has caused the DA-led city.

He claimed even service delivery has deteriorated as a result of their bitter feud. He asked Maimane to persuade the EFF to support a move to suspend or remove Mosola.

Msimanga accused Mosola of threatening officials almost on a weekly basis because they refuse to do wrong. Mosola is being investigated by the city for the GladAfrica tender.

Tshwane Metro COO James Murphy has distanced himself from the controversial appointment of GladAfrica.
News
3 years ago
Next Article