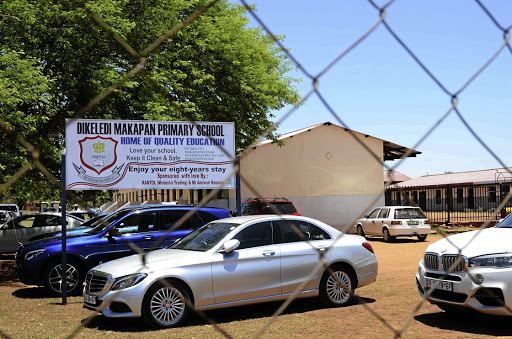 Mduduzi Ndzingi A grade 1 pupil was stabbed to death at a primary school in Makapanstad, North West, last week.

A 17-year-old boy accused of stabbing seven-year-old Charlton Karuweruwe to death in a primary school's toilet has briefly appeared in court for the second time.

The North West teenager's case was postponed to tomorrow in the Moretele magistrate's court in Temba while he will be kept at a juvenile centre in Rustenburg. He appeared behind closed doors accompanied by his mother, a social worker and a detective.

The grade 11 pupil was arrested on Wednesday last week after he allegedly stabbed Charlton, a grade 1 pupil, at Dikeledi Makapan Primary School in Makapanstad. Charlton was rushed to the local clinic but was certified dead.

Wearing black jeans, white sneakers and a brown check shirt, the teenager walked slowly to court C. He had stitches on top of his right eye which was also swollen.

His head was covered in a white bandage that was showing under the red bandana he was wearing.

Stabbed boy 'did not deserve to die like that'

"Mama please buy me cake when you come back from work."
News
3 years ago

Some people sitting outside the court room felt sorry for him, saying it could not have been his doing "but that he was propelled by evil spirits".

The suspect's mother, who was waiting outside the children's court, refused to talk to Sowetan about the incident.

"I did not send anyone to do anything so leave me in peace, this is hurting me," she said before humming a church song.

A source told Sowetan the past few days had not been easy for the suspect.

"He struggles to sleep at night as he keeps screaming that he can see the deceased who is asking why him," said the source.

Charlton will be buried in his mother's native country of Zimbabwe on Saturday. A service in his memory will be held tomorrow at the school.

The family said they wanted to allow his school mates, friends and community members to pay their last respects to him.

North West education spokesperson Freddy Sepeng said a task team had been formed to help the family with funeral arrangements. "The school is receiving psychological counselling," he said.

A grade 1 pupil has died after he was stabbed multiple times, allegedly by a grade 11 pupil.
News
3 years ago
Next Article