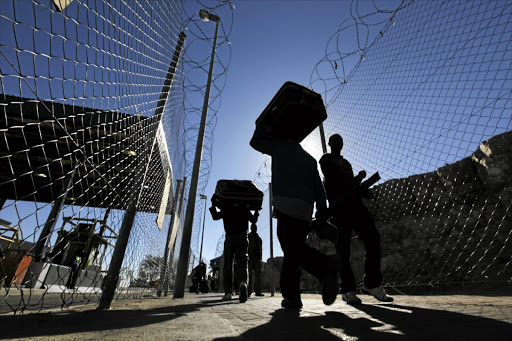 Zimbabweans walk across the Beitbridge border post.The department of homes affairs is hiring 425 extra staff and will extend the hours at the country's busiest ports during the festive season.
Image: ESA ALEXANDER

The department of home affairs is deploying 425 additional staff members and will  extend operational hours at the country's busiest ports of entry during the festive season to deal with the increased number of travellers into and out of the country.

Deputy minister Fatima Chohan told journalists that the department was ready to handle increased traffic, in particular at the air and land ports. Chohan said the festive season — officially starting on December 5 until January 9 2019 — heightened movement across the ports of entry and the demand for home affairs services, particularly passport applications.

The festive period, along with Easter and school holidays, is the peak season at national borders.

Chohan said in the 2017-18 festive season, a total of 8,468,262 movements were captured, comprising arrivals and departures of SA citizens and foreigners.

Over  180‚000 Zimbabwean nationals living in South Africa have applied for official documentation to allow them to stay‚ work‚ study and conduct ...
News
3 years ago

Chohan said that in preparation for the upcoming festive period, the information technology (IT) team at home affairs was conducting a clean-sweep operation to ensure that all IT equipment was in a good condition at all the ports to ensure optimal functioning.

“The team is also setting up overflow areas for processing of travellers in Maseru Bridge, Lebombo and Beitbridge, in order to cater for the volumes expected,” she said.

She said it was imperative that ports of entry were adequately prepared to facilitate traveller movement and to curb illegal movement and transgressions.

Security dynamics and risks during peak periods include fraudulent documents, undocumented travellers and poor access control due to congested roads.

Chohan implored travellers leaving and entering SA to ensure that all their travel documents were in order to avoid unnecessary delays at ports.