Lekganyane calls for calm during elections 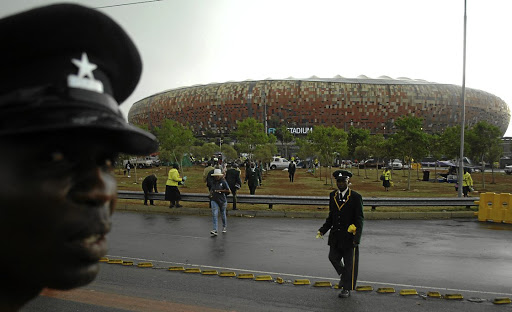 Thousands worshippers packed FNB Stadium in Nasrec, outside Soweto, yesterday for a day of prayer that was address by ZCC's bishop Barnabas Lekganyane, among others.
Image: Ziphozonke Lushaba

As the country heads into its fifth national general elections, the leader of one of the country's biggest churches has warned political leaders not to incite violence by making inflammatory remarks.

Zion Christian Church's bishop Barnabas Lekganyane made the remarks yesterday while delivering the keynote address at the 2018 National Day of Prayer at a packed FNB Stadium in Johannesburg.

He urged South Africans not to vote for leaders hellbent on making empty promises.

Thousands of church congregants from more than 30 churches and faith-based organisations filled up FNB stadium to participate in the 2018 National ...
News
3 years ago

"As we approach next year's election, we urge leaders of political parties to advise their supporters to lower their temperature.

"As we have seen in the past, rival political party members usually confront each other [during elections] and this has resulted in political attacks and killings.

"Every politician should make their supporters aware that though they come from different political parties, they belong to one country.

"They need to make them understand that the country doesn't shut down after the elections.

"When the elections are peaceful, free and fair, we all smile and rejoice at our maturing democracy," said Lekganyane, who has led the church for 43 years.

He said his church would not prescribe to members who to vote for.

"However, we will never stop praying for politicians to honour the promises they have made and do their work.

"I once again appeal to you voters to vote for honest leaders who walk the talk and honour their promises."

The event saw thousands of South Africans brave the rain to make their way to the stadium outside Soweto.

There was, however, chaos outside the 94000-capacity venue as a large number of people, including some VIPs and media people, were barred from entering the stadium due to security concerns and fears of a stampede.

As the dark clouds gathered and rain pummelled the stadium, the masses dashed for cover.

Some people eventually lost hope and left, while others hoped they might still manage to sneak into the stadium.

A ZCC congregant who had come from Limpopo for the prayer day said he was disappointed after he was locked out of the stadium while his family was inside.

"I came with my wife and kids and now I cannot go inside after I went to get food and drinks.

"We left Venda in the early hours of the morning to be here," he said.

A Durban couple from the Shembe Church said they were also locked outof the VIP section after security guards informed them that the venue was full.

"My wife and I are were excited to be here and we cannot wait to be inside. We've planned all month to be here to join the nation in prayer for our beloved country."