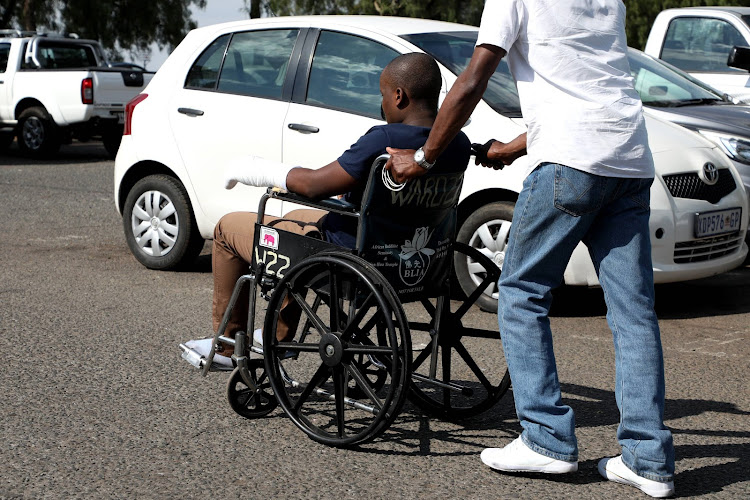 Thando Dlamini says he was shot by a policeman while trying to enter the Engen garage in Strijdom Park, Randburg.
Image: SANDILE NDLOVU

A young Johannesburg Taxify driver is lucky to escape with his life after allegedly being shot by police, in an incident reminiscent of rapper Khuli Chana’s case.

Thando Dlamini from Cosmo City was on Friday languishing at the Helen Joseph hospital after suffering a single gunshot wound to his middle finger, with the bullet also piercing his stomach before exiting on the other side of his body.

The incident happened at a garage on Malibongwe Drive in Kya Sands, north of Johannesburg in the early hours of Thursday.

But unlike in the Khuli Chana case where the police had mistaken his car for that of criminals they were pursuing, Dlamini, 23, accused the cops of being trigger happy.

Speaking from his hospital bed on Friday, Dlamini said he was still shocked that the police opened fire on him without provocation.

“I was sitting in my car with one of the petrol attendants who is my friend while my phone was charging inside the garage. It was around 3am and as I got out of the car to check the phone in the garage, a shot rang out and I fell to the ground.

“It was completely quiet. There was no robbery taking place at the garage where you’d say maybe they were trying to shoot at the criminals. My car was not reported stolen or anything. It was dead quiet. They didn’t even fire a warning shot but aimed straight at me.

“One officer got out of the car with an R5 rifle and approached me. I asked him why he shot me and they told me they thought I was a criminal and was running away from something. They watched me lying there bleeding and ordered everyone not to touch me. They even said that they can’t touch me because they are not trained for it,” he said.

A police officer was arrested on Monday for kidnapping and extortion after officers accidentally shot and wounded singer Kuli Chana, Gauteng police ...
News
8 years ago

The driver said he was now fearing for his life and wanted to be removed from the hospital despite the fact that he was still in deep pain.

“I fear that they will come and finish me off,” he said with tears welling in his eyes.

Sunday World saw video footage taken by Dlamini’s father Bheki Mpofu moments after he arrived at the scene which showed that the policeman shot at him through a closed window.

The police car’s window appeared shattered and the father could be heard pleading with the two officers to not contaminate the scene.

He also dared them to shoot and kill him before they could tinker with the crime scene.

The injured Dlamini could be seen lying on the floor in the background as well.

Mpofu said that his wife received a call from Thando, saying he was shot.

“We then rushed to the garage and found him lying on the floor with a gun shot wound and moments later an ambulance arrived and was taken to hospital,” said Mpofu.

He said he went back to the garage with his wife and asked to see the CCTV footage to understand what had happened, but was told by employees a certain police captain instructed them not to show the footage to anyone because it was police evidence.

Rometh Rikhotso of BH Taula Attorneys in Roodepoort said they were representing the family in the case and would tomorrow issue a letter of demand against the police minister and ensure the two officers get charged for attempted murder.

The Independent Police Investigative Directorate (IPID), tasked with investigating complaints against police officers, confirmed they were conducting an investigation into the conduct of the two cops in question, who are based in Randburg.

IPID spokesman Moses Dlamini said no one had been arrested yet but investigations were underway.