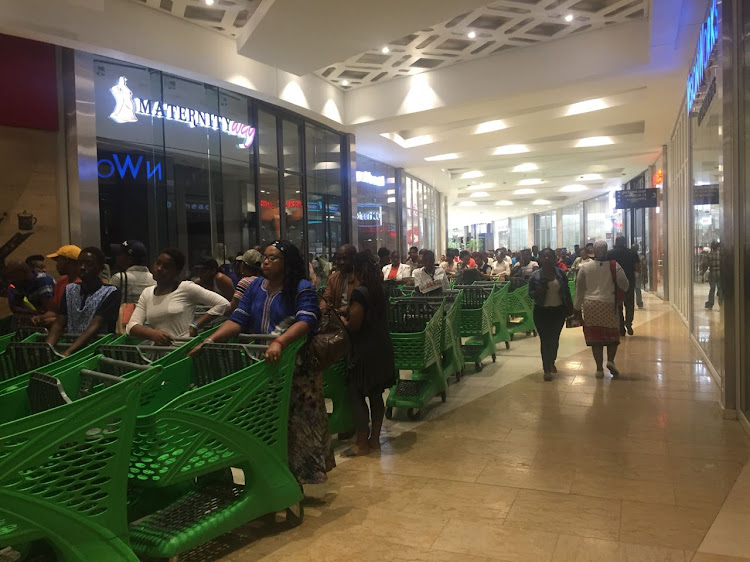 Customers are gunning for shoes, technology and toys are the main attraction on Black Friday.
Image: JESSICA LEVITT

Toys‚ shoes and technology are the exception to an otherwise lacklustre start to Black Friday sales in major South African centres this year.

A long line of early Christmas shoppers snaked up to the Toys R Us store at Canal Walk in Cape Town.

“I’ve been dying to buy it‚ but it’s been so expensive‚" she said‚ before heading home to rest.

“We’ve seen the exact shoes we want and the size. We just need to pay‚” said Raymond Thobela‚ from Khayelitsha‚ as he waited in line with his wife‚ Amanda‚ outside the Superga outlet in Canal Walk.

It was an anxious wait as the store was allowing only 10 customers in at a time for its Black Friday specials.

Anathi Rubela waited from 4am to get his hands on an iPhone X at Cavendish Square in Cape Town.

Shoe shopper Alton John‚ from Hanover Park‚ got his special deal from Timberland in Canal Walk‚ scoring a pair of boots he plans to wear tonight.

Rafiek Laishai‚ from Bonteheuvel‚ said he was shopping for his grandmother‚ who collects shoes. “Every Black Friday‚ my grandma sends me to buy stuff‚” he said‚ heading home with this year’s pair.

How to avoid being duped in Black Friday stampede

Thugs, retail shops and cyber criminals are all geared-up for the Black Friday and the target is the consumer with their fat bonuses.
Business
3 years ago

Oscar Nyamayaro told SowetanLive at Johannesburg's Mall of Africa that he was spoiling his wife and children today.

“I’m here to buy nice things for my family and my kids. A few toys and some gadgets‚” he said.

Nyamayaro and his wife‚ both dressed in red‚ carried big smirks ahead of the Black Friday deals at Mall of Africa.

“You know‚ man‚ I love Black Friday. I’m loving it big time. There are a lot of nice prices here.”

At the Nike Factory Store in Woodmead‚ a shopper said he had been waiting in line since 5am. “Yoh my man‚ I have been here all morning. I should have packed a lunch box for this line‚” said the man‚ who declined to be named.

He said his eyes were set on a pair of Nike Airmax. “I only want that one shoe‚ man. I hope they don’t run out of stock otherwise I will be very disappointed.”

The line for the Nike store stretched to outside of the centre.

A shopper who identified himself as Tshepo joined the queue at around 5.30am. He came all the way from Randfontein and took three taxis to get to the store. “I’m going to spend R30‚000 on tekkies today. I am going to buy ten pair of tekkies for me and my son.”

Jabulile Ndlovu said she arrived at the Nike store at around 8.30am on a mission for her one-year-old daughter. “The line is too long‚ yooh. I wanted some nice Nike tekkies for my little one. I don’t think we are going to get them‚” she said.

Keeping your bank balance in the green this Black Friday

Her friend‚ Samkelisiwe Buthelezi‚ decided not to queue. “We got here and saw the line of the queue and decided to move on to other shops. We are very disappointed.”

In various centres‚ television sets and large appliances were also in demand on Friday morning as the year’s biggest sale kicked off.

Cape Town student Nicola Haller’s Black Friday deal was part one of a mission to get herself an Apple watch.

She scored a great deal by getting up early enough to receive a discount from the iStore in Cavendish Square‚ but she’s not sure it will be hers come December 1. She may have to hand it over to her mom if she loses a bet that whoever lost the most weight in November would get the watch.

Her friend‚ Phi Allen‚ scored a laptop in their early morning shopping spree.

Everyday items were also proving popular at supermarkets like Checkers Hyper‚ which had a sizeable number of shoppers at its stores. Several shoppers were spotted across Johannesburg and Cape Town pushing trolleys with items like disposable nappies‚ toilet paper‚ sugar and milk.

Even shoppers from wealthy areas were out hunting down bargains. A shopper at Pick n Pay in the V&A Waterfront in Cape Town was stocking up on toilet paper and cleaning products. “We own an Airbnb in Camps Bay‚ so I’m getting everything now. It will help to bring down the costs‚” said the woman‚ who asked not to be named.