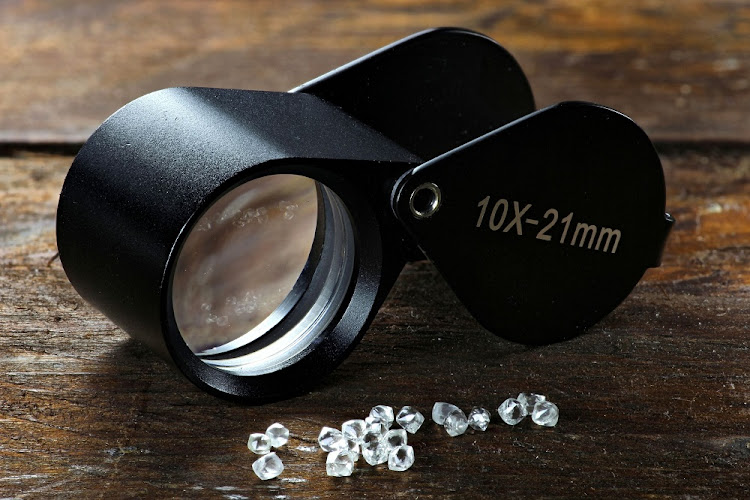 Uncut diamonds being exchanged at a local pub piqued the interest of police in Somerset West. Dealing in illegal diamonds is a dangerous business, with many deaths resulting from deals going wrong.
Image: Bjoern Wylezich/ 123RF

A deal in uncut diamonds worth R400,000 ended abruptly when police arrived at a local pub in Somerset West.

Two men, aged 36 and 56, were arrested there on Wednesday after police received information that one of them was planning to sell diamonds to the other.

"Upon their arrival, police found two men in possession of uncut diamonds. The men could not provide proof of ownership and were arrested for possession of unpolished diamonds," said police spokesperson Sgt Noloyiso Rwexana.

The men are expected to appear in the Somerset West Magistrate's Court on Friday.

"The circumstances surrounding the stones and their authenticity is under investigation," added Rwexana.

Two men were arrested in a shopping centre in Table View‚ Cape Town‚ on Tuesday‚ after being found in possession of unpolished diamonds valued at ...
News
4 years ago

Diamonds are sometimes used as currency in the criminal underworld.

Earlier this year, Bulgarian couple Nessie Peeva and Angelo Dimov were killed after trying to sell a large quantity of uncut diamonds to buyers in east Asia.

Dimov was believed to be linked to a Bulgarian syndicate in Cape Town implicated in credit card fraud and ATM scams.

He was a suspect in a high-profile banking fraud case in the Bellville Specialised Commercial Crimes Court when he was murdered.

He was killed in bed at his Constantia mansion in August that year.