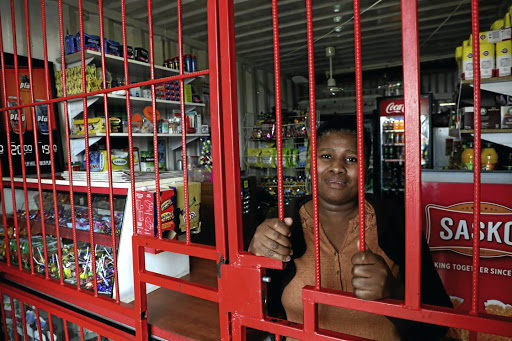 Foreign nationals have started trickling back into Soweto to revive their spaza shop businesses after they were violently evicted by the locals who accused them of selling expired food.

They were kicked out of White City and other parts of the township in a much-publicised violent action almost three months ago.

But the foreigners' comeback has divided the residents of White City, which was hit hard by the violence, as local entrepreneurs believe they will cripple their businesses, while other residents are happy because they will no longer have to travel long distances to buy groceries.

A White City resident, who preferred to remain anonymous, told Sowetan she was happy when she saw foreign traders returning as their eviction had inconvenienced them because they were forced to walk long distances to buy groceries elsewhere.

"A supermarket run by a local is more than a kilometre away and when we get there we'd stand in long queues as the stores are always packed because all members of the community were now buying from there," she lamented.

Though a shop located at her street corner is still closed, foreign nationals operating in the other street have made life easier for her.

"The other disadvantage was that shops run by locals open at 7am and close at 7.30pm, while foreigners' operate between 6am and 9pm."

When some community members got wind of the return of the foreign entrepreneurs, they went to their stores and ordered them to pack up and leave.

There are simply not enough inspectors to check on the food being sold by spaza shops in parts of Gauteng.
News
2 years ago

SAHRC preliminary report into expired food due in January

The South African Human Rights Commission (SAHRC) is set to review public submissions on allegations that counterfeit or expired food is being sold ...
News
2 years ago

"One of the shops has been turned into a hair salon while others remain closed. Two shop owners tried to come back a month ago but members of the community told them to leave," said Mbongo.

"There's now only one foreigner operating in my street following a special request from community members that they need his services.

"This means it's only him and myself who are now running the spaza shops."

Sabata Banda, a local ward councilor, said law enforcement should keep a close eye on foreigners wanting to come back.

"There law should take its course on the matter in a way that's going to protect the constitution of the country. For foreigners who want to operate in the township, the South African Revenue Service and home affairs must check whether they are operating legally," said Banda.

Pebetsi Khwinana, who resides in Central Jabavu, said it was wrong to chuck out the foreigners on allegations that they sold expired food.

"If the food was expired why did the protesters take it home [to eat]. I don't have a problem with foreigners," Khwinana said.

But a man who refused to identify himself said they had had enough with the foreign shop owners "and they must just leave".

'How am I expected to compete with them?'

When entrepreneur Mpumi Shezi saw foreigners being kicked out of their spaza shops in Soweto, she immediately quit her job as she viewed this as an opportunity to take advantage of her entrepreneurial ambitions.

The booting out of foreigners resulted in Shezi, of White City, quitting her job at Montecasino in Fourways, Johannesburg, and cashing in her pension to buy a building in the area for her business.

Before buying the store, the married mother of two used to run a business that sells kotas from a container while she was also employed.

"When I learnt that foreign entrepreneurs were being chucked out, I had to think big and I immediately resigned from my job, cashed-out my pension and used the funds to purchase this shop. However, with foreign nationals coming back I think I made a big mistake by resigning as I stand to lose all my money," Shezi said.

"Foreign nationals have a competitive edge because they sell goods on credit, which is a business model I'm not willing to entertain. They also sell a loose draw of cigarette for R1 while I charge R2.50. How am I expected to compete with them?" she asked.

Another spaza shop owner, Jennifer Mbongo, said she has seen a dramatic increase in the number of customers when foreigners were kicked out of the township. Mbongo, however, also bemoaned that it was challenging to compete against foreign shop owners.

"Their prices are very low and I find it hard to operate in the same space with them. Our economy is shedding jobs, which has made cash hard to come by. This makes consumers to chase lower prices..."

A businessman who preferred to remain anonymous said the absence of foreigners was a learning curve for him.

"The foot traffic we got from people increased by 25%, but I noticed that customers were buying things that they couldn't get from foreign nationals like bread and airtime."

He said he did not have anything against foreign nationals "because they serve a need which we don't fulfill as they close very late at night and their prices are much cheaper than ours as their overheads and staff costs are way less than mine".

"For instance, I'm required by law to pay for the Unemployment Insurance Fund, a minimum wage and all those types of things that we've to pay, and my electricity rate is higher because my property is zoned for business while theirs is still zoned as residential."