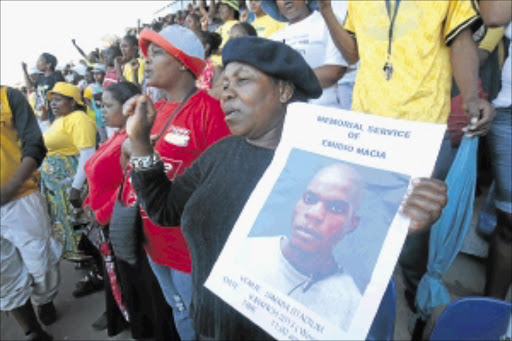 The family of Mido Macia who died in police custody will know on Wednesday of their lawsuit has been successful.
Image: Veli Nhlapo

The family of Mido Macia‚ a Mozambican taxi driver who died in police custody in 2013‚ will on Wednesday know if their claim for compensation of R6.5m has been successful.

Macia‚ 27‚ was filmed being tied to a back of police van and dragged along a street in Daveyton‚ east of Johannesburg.

In 2015‚ the North Gauteng High Court found eight of the former cops guilty of his murder.

'Cops used van to drag and kill my brother'

Two police officers are implicated in the death of a man who was dragged by a state vehicle after an argument on New Year's Day. John Khubayi of ...
News
5 years ago

Macia's family filed a R6.5m lawsuit against the minister of police.

The matter is expected to be finalised on Wednesday afternoon at the Mozambican consulate in Saxonwold‚ Johannesburg.

This was confirmed by Jose Nascimento Attorneys‚ representing the family.

"The family will be there. I cannot confirm who from the police or ministry will attend‚" Nascimento said.