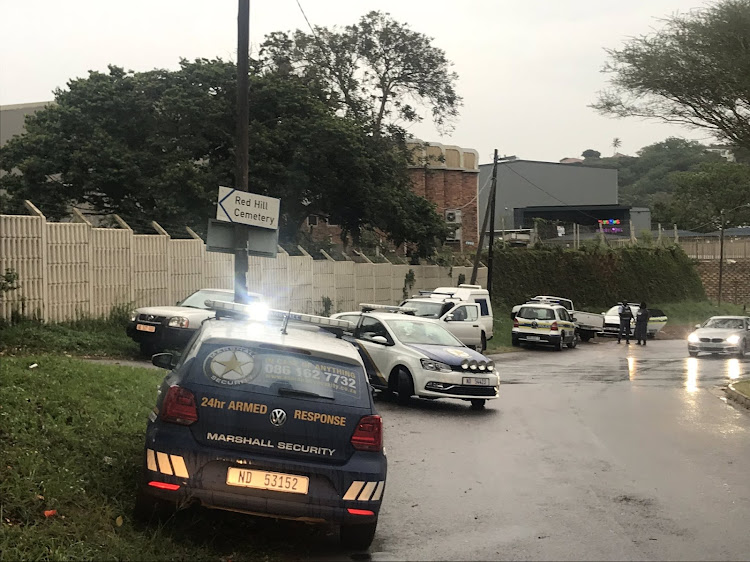 The graveyard where suspects in a fatal shooting in Durban dumped their vehicle on November 20 2018.
Image: JEFF WICKS

Two men have been shot dead in what is believed to be a home invasion gone awry in Durban North on Tuesday evening.

Police sources with intimate knowledge of the incident, who spoke to TimesLIVE on condition of anonymity, said that a gang of armed men had tried to force their way into a property in the upmarket suburb of Landsdowne Crescent.

They were intercepted by armed reaction officers and a gun battle had ensued, leaving a suspected house robber dead.

His body lay in the middle of the road surrounded by spent bullet casings and an AK47 rifle. Brass cartridges littered the scene and security vehicles which had been first into the fray were pockmarked with bullet holes.

The scene of a shooting in Landsdowne Crescent in Durban North. A man lies dead in the distance. Spent bullet casings litter the ground @TimesLIVE pic.twitter.com/4rfWJSbkgW

It is understood that the man’s cohorts had fled. A car that was riddled with bullet holes, thought to have been from the initial barrage, was found abandoned nearby in the Redhill municipal cemetery.

The bloodied body of a man was found near the vehicle, with two other men believed to have fled on foot.

#DBNShooting - @SAPoliceService spokeswoman Col Thembeka Mbele confirms that two men were killed in the shooting. She says that detectives are at the scene.

Police spokeswoman Colonel Thembeka Mbele said that the four had stormed into a house and held residents at gunpoint. She said that a panic alarm had been triggered, prompting a response from Marshall Security.

Mbele added that the scene remained active and while details were scant, she could confirm that two men had been killed.