Medical aid won't pay as time runs out for doc 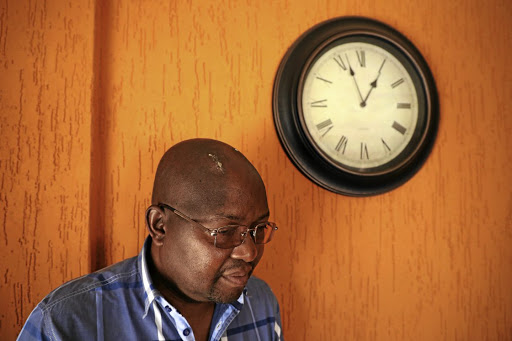 The clock is ticking for cancer patient Sipho Bvuma whose medical aid scheme Gems is being accused of denying him medical treatment and paying for a brain cancer treatment. /Thulani Mbele

A medical doctor who has stage four brain cancer is embroiled in a legal battle with a medical aid after it refused to pay for a drug, he maintains will save his life.

Dr Sipho Bvuma who works at the Chris Hani Baragwanath Academic Hospital was successful in his court bid to force the Government Employees Medical Scheme (Gems) to pay for his treatment two weeks ago.

However, Gems is appealing the ruling by the South Gauteng High Court in Johannesburg on the basis that Bvuma's condition has reached an advanced stage and paying for him to access the expensive drug would be pointless as it cannot save his life.

The drug called Keytruda would cost R583000 for six cycles. A cycle of treatment is equivalent to two days a week.

Speaking to Sowetan yesterday, Bvuma, 49, said he believed the drug could prolong his life by suppressing the tumours growing on his brain.

Bvuma said his doctors recommended that he get Keytruda to treat his condition after viewing recent scans but Gems refused to fund the treatment.

"They suggested an inferior drug. That is why my doctors are in court to fight that decision. It is just unfortunate to know that your life relies on the whims of a few people. I know that I've got a medical aid which I'm paying every month and I expect it to help me," he said.

Bvuma, a father of three who started practicing medicine 23 years ago, said his woes started in 2016 when one of his kidneys was removed due to renal cancer.

He said he continued receiving chemotherapy after being diagnosed and was responding well. However, in November 2017 he started suffering from severe headaches leading to his experiencing a seizure while at work.

Scans revealed that he was suffering from brain cancer and he continued with treatment until receiving surgery about two months ago.

Bvuma said he believes without Keytruda he could die within three months or drop dead at any time.

Medical scheme contributions will increase by approximately 7.75% on average this year.
Business
4 years ago

"I feel like my right to life and dignity is being trampled by Gems. It breaks my heart. I spend my nights awake. I believe with Keytruda I can live until 68 and lead a productive life," he said.

Bvuma states in court papers that his premiums were increasing annually and he was paying a R2 848 by November 2017.

He said being a medical doctor made his ordeal worse as he understands the full extent of his condition.

"It's even more painful because I can picture my brain right now. I can see where the blockage is," he said.

Bvuma said he wanted to share his story in the hope that it would bring attention to the plight of thousands of patients who are denied treatment.

In court papers which the Sowetan has seen, Gems stated that the company could not pay for treatment which will not have the desired effect.

"The applicant's condition unfortunately, has reached an advance stage and the cost of the treatment is not justified under the circumstances. At the end of the day Gems cannot pay for treatment that will not achieve the desired result of saving the patient's life," it states.

The medical scheme also argues that Bvuma's condition is deteriorating as a previous procedure failed to assist him, adding that there is no clinical evidence that Keytruda would save his life.

"The cost of Keytruda treatment far exceeds the applicant's available annual oncology benefits. Payment for such a high-cost treatment for one member, whose disease is associated with poor prognosis is not justified," Gems argues.

It further states that the treatment Bvuma seeks is not registered by the Medicines Control Council for treating his condition.

Hear us out, says Gems

Yesterday Gems principal officer Dr Guni Goolab said he was confident they would succeed in overturning the court order.

"Gems are of the view that the court could come to a different finding with the benefit of all the relevant information being placed before it.

"The scheme is accordingly not appealing the judgment, but rather asking the court to reconsider its judgment, as Gems was deprived of its constitutional right to be heard when the court made its order the first time," Goolab said.

He said looking after the funding needs of their members is important, however according to their rules the scheme is not allowed to fund medicines that are not registered by the Medicines Control Council.

"There are no relevant studies demonstrating that the drug is either effective, or cost-effective, for his condition in a South African context. On the available evidence, there are no prospects of this treatment having any benefit for the member's particular condition and funding was therefore declined," Goolab said.. - Zoe Mahopo