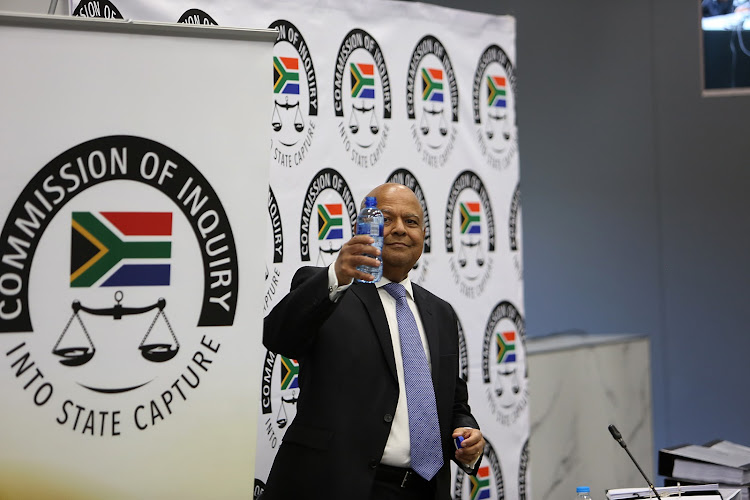 On day two of his testimony before the Zondo commission of inquiry into state capture‚ Gordhan said it was clear soon after his appointment that the appointment was a "mistake" for those enabling state capture.

"Something had to be done to get rid of me‚" Gordhan said.

He said because of "hard lessons" that were learnt following the axing of Nhlanhla Nene and the short-lived appointment of Des van Rooyen‚ he couldn’t be fired.

"Other means needed to be found to force me to resign‚" Gordhan said.

The minister was detailing the infamous 27 questions sent to him by the Hawks in relation to an investigation they were conducting into his role in setting up a unit in SARS. In a clear attempt to unsettle him‚ the questions were submitted to him a week before he was to make his budget speech in February 2016.

Cyril Ramphosa's frantic message to Pravin Gordhan during Nenegate: 'Do not refuse'

"Do not refuse". That is the message then finance minister Pravin Gordhan received from President Cyril Ramaphosa
News
2 years ago

"I received the questions‚ I was concerned and angry ... I was angry particularly because any government will know the importance of budget and budget day in the welfare of the country as a whole‚" he said.

Gordhan said he had a meeting with then-president Jacob Zuma to complain of this harassment‚ but Zuma had said nothing‚ besides saying he would discuss the matter with then-police minister Nathi Nhleko.

Gordhan further detailed a meeting he had had with then-ANC secretary general Gwede Mantashe‚ his deputy Jessie Duarte and then-treasurer general of the party Zweli Mkhize‚ who assured him that this matter would be dealt with politically.

He told the commission that a day after the budget‚ the 27 questions sent to him were leaked to the media.

"The leaking of the 27 questions showed there was an agenda ... clearly there was some orchestration going on‚" he said.

Gordhan noted that there was a sinister motive to the investigation launched by the Hawks almost a year after the charges were first laid against him by then-Sars commissioner Tom Moyane.

He said the questions were not in the nature of a "general‚ objective and legal inquiry”.

The role of then-intelligence minister David Mahlobo was also raised as he participated in a press conference defending the questions sent to Gordhan.

Deputy chief justice Raymond Zondo asked Gordhan on Tuesday why Mahlobo was present at that press conference‚ as he was not the minister of police.