Zingiswa Losi to save ailing Cosatu 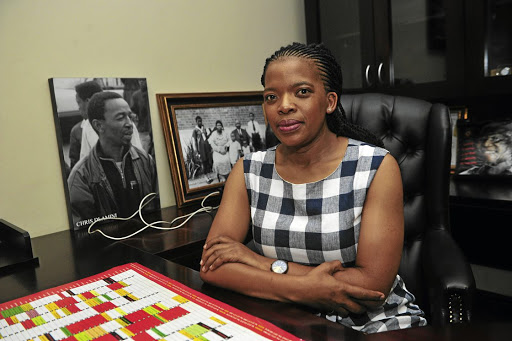 Being a mother and a leader has its own challenges.

"I always fear being celebrated by people for who I am in society while my two daughters see me as a mother who does not have time to listen and be with them."

This is what Cosatu president Zingisa Losi tells Sowetan in a wide-ranging interview on work and being a mother, sister and aunt.

She says the only time her children and family get her undivided attention is during December holidays.

"The two-week break in December is great. I am so looking forward to it because I go home to Port Elizabeth and I become Zingisa. I become a child and get to go away for few days with my siblings and our children."

New Cosatu president Zingiswa Losi dubbed her election as a message to the world that women in her federation were ready to take responsibility.
News
3 years ago

The 43-year-old works seven days a week. "That is why any break I get, I do my best to rest and be with my children."

Losi, who comes across as confident when she speaks, says she learnt to be a tough cookie during her Congress of South African Students days where she was the only female leader at the time.

She says although she was an additional member at Cosas, she worked tirelessly to push for a balanced ratio of teacher to pupil in classrooms.

"I remember in 1995 after I had left Cosas, I continued to work with them in ensuring that it wins on the struggle of teacher-pupil ratio.

"I also worked hard in ending one infrastructure shared by two schools."

When she started formal employment, she was surrounded by men.

She recalls when she was employed at the South African Air Force base in Bloemfontein, Free State, that she was the only African female working among Afrikaner men.

She says her colleagues told her Madiba was not welcomed in their town.

"Mandela is your president not ours," she was told.

Losi then moved to work for Ford plant in Port Elizabeth and became a National Union of Metalworker of South Africa's shopsteward, that is how she rose through the ranks.

She was elected second deputy president of Cosatu in 2009 and it was under a Numsa ticket. But she had a fall out with the union before it was expelled from Cosatu in 2014.

She then went on to join the SA Police Service's civilian secretariat as deputy director in the same year and was soon elected a Police and Prisons Civil Rights Union shop steward, protecting her position in the federation.

"Coming to Cosatu was not difficult at all. I have managed through out the years to build emotional intelligence. I know what battles to fight."

She says she inherited a labour federation that is battling with some affiliates that have become weak due to lack of finances and internal power struggles.

Losi says she has to find a way to resolve these problems because workers need a strong Cosatu.

That is why the congress resolved that it should talk to unions that have left Cosatu as well as the expelled Numsa.

She, however, warns that Numsa should change its constitution if it has to be accepted back into Cosatu.

"Since our congress, we have not held formal meetings with unions that have left but there are talks with some union leaders on the floor.

"Numsa was expelled from Cosatu because it changed its scope and recruited members in all sectors. That is in violation of the Cosatu constitution. If they come back they must acknowledge the wrong and correct it," she says.

Cosatu has officially named its top six leaders to take over the reins from their predecessors with a balanced mix of gender representation.
News
3 years ago

Losi says Cosatu's normal central executive committee meeting will sit soon for leaders to reflect on the resolutions taken at congress and come up with how they implement them going forward.

There is a lot to do, she says, especially after Cosatu resolved to campaign for the ANC in the 2019 elections.

But Cosatu will fight the ANC should it take corrupt leaders to parliament and some to cabinet if it wins elections.

"The state capture inquiry is slowly revealing an impact of corruption in government.

"Our members are whistleblowers and some have lost their jobs. Those implicated can't be in our parliament."

She says the ANC will have to adhere to its conference resolution that those found wanting should not occupy leadership positions.

"We want a decisive ANC. We can see that with president [Cyril] Ramaphosa some have resigned and we want them to go one by one as they get exposed in corruption."

Losi says corruption paralyses the state and has led to workers being retrenchedVAT being hiked and the economy not growing.

"We want people who will deliver for the people and not steal from the government.

"We are not short of leaders, those implicated cannot be in parliament or in the government," she says.